The Euro brushed off news over the past 24 hours that Italian Prime Minister Giuseppe Conte resigned. This means that the country needs to either form a new government or risk heading for snap elections. The former may result in Deputy Prime Minister Matteo Salvini, who has been leading in local polls, creating an alternative coalition while the latter risks relatively more uncertainty over future budget clashes with Brussels.

The markets may be placing their bets on a new alternative coalition for the time being as the less-risky outcome. Italian government bond yields, which can be used as a proxy for default risk, ended up aiming lower over the past 24 hours. Meanwhile, markets me be hesitating to commit to Euro exposure ahead of critical event risk this week such as the FOMC minutes and the Jackson Hole Symposium.

Taking a closer look at EUR/USD, the near-term downtrend from the retest of descending resistance – red parallel lines below – is once again struggling to continue its journey downward. Support is holding just above the 78.6% Fibonacci extensions at 1.10484. Meanwhile, positive RSI divergence shows fading downside momentum. At times, this can precede a turn higher or translate into consolidation.

However, IG Client Sentiment is offering a stronger EUR/USD bearish contrarian trading bias. The number of traders who are net long the Euro have increased 3.7% and 33.6% from yesterday and last week respectively. If you would like to learn more about using IG Client Sentiment as an element in your trading strategy, join me on Wednesday’s at 00:00 GMT here. 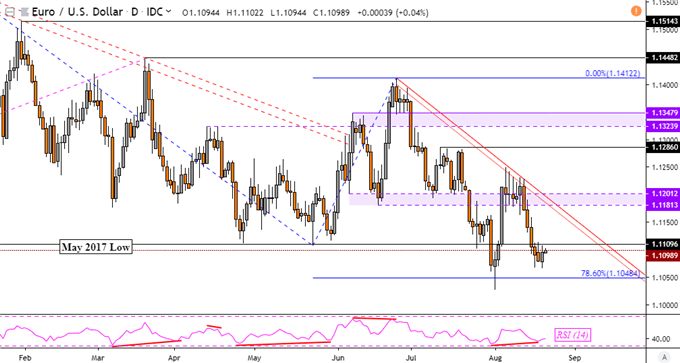 Asia Pacific equities may follow Wall Street lower after the S&P 500 dropped 0.79% on Tuesday, potentially boosting the anti-risk Japanese Yen. The backdrop for the decline in investor sentiment could be traced to US-China trade tensions. US Secretary of State Mike Pompeo said that Huawei is not the only business that poses a risk. Later, US President Donald Trump noted that he is not ready to make a deal with China.