US Dollar and Bond Yields Climb. Gold Prices at Risk to Long Bets

The US Dollar edged cautiously higher against its major counterparts on Monday as a pickup in risk appetite sent local bond yields rallying. The latter helped diminish the inversion of a closely-watched segment of the yield curve as recession fears ebbed. As a result, anti-fiat gold prices fell as the precious metal sought to extend losses from the end of last week.

The cheery mood in investors seemed to reflect easing US-China trade tension bets. Earlier in the day, President Donald Trump said that the country is “doing very well with China, and talking”. Later, Commerce Secretary Wilbur Ross noted that the country will delay - by 90 days - imposing restrictions on companies doing business with China’s Huawei. The latter is a key part in the ongoing trade war.

Gains in the Greenback and local bond yields picked up pace when Boston Federal Reserve Bank President Eric Rosengren spoke. He mentioned that he wants to see evidence of a slowdown to justify easing as Trump tweeted that the central bank should reduce rates by 100-basis points over a “fairly short period of time”. Mr Rosengren was a dissenter to the 25-basis point cut the central bank delivered in July.

The drop in gold prices left the precious metal closing at its lowest since August 7 as rising net-long bets offer a bearish-contrarian trading bias. Near-term support is sitting at 1493 with a close under opening the door to testing the 38.2% Fibonacci extension at 1471. If you would like to learn more about using IG Client Sentiment as an element in your trading strategy, join me on Wednesday’s at 00:00 GMT here. 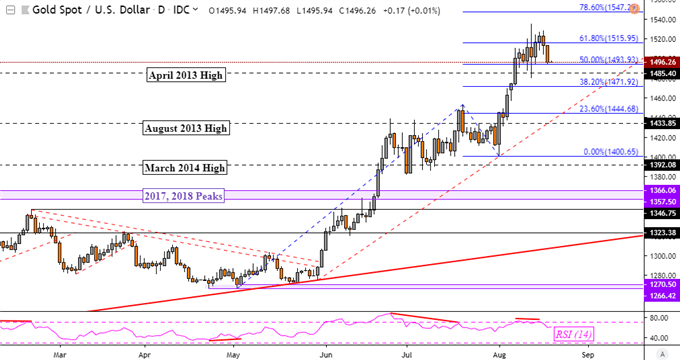 Looking towards Tuesday’s Asia Pacific trading session, we may see regional bourses follow Wall Street higher after the S&P 500 closed 1.21% to the upside. That may bode ill for the anti-risk Japanese Yen while supporting the sentiment-linked Australian Dollar. The latter will also be closely watching upcoming minutes from the August RBA monetary policy announcement.