Euro Decline Eyed, NZD too as Manufacturing Shrinks Most Since 2012

The Euro underperformed over the past 24 hours as ECB Governing Council Member Olli Rehn said that the central bank should come up with a “significant and impactful policy package” come September. German and Eurozone government bond yields declined, signaling the markets were pricing in more aggressive easing from the world’s second-largest central bank.

Back in July, the ECB hinted at further quantitative easing along with interest rate cuts deeper into negative territory. However, markets were left underwhelmed as President Mario Draghi expressed the different nuances of views regarding parts of further stimulus packages. As such, markets were left waiting for the specifics of what the ECB could deliver next month. Today seemed like a build in anticipation of what may come.

As such, we saw EUR/USD extend its near-term downtrend after testing descending channel resistance from June on the chart below. This also followed a false breakout above former support at 1.1201. The Euro is thus now approaching former 2019 lows with near-term support as the 78.6% Fibonacci extension at 1.1048. Downtrend resumption would eventually pace the way to targeting lows from April 2017. 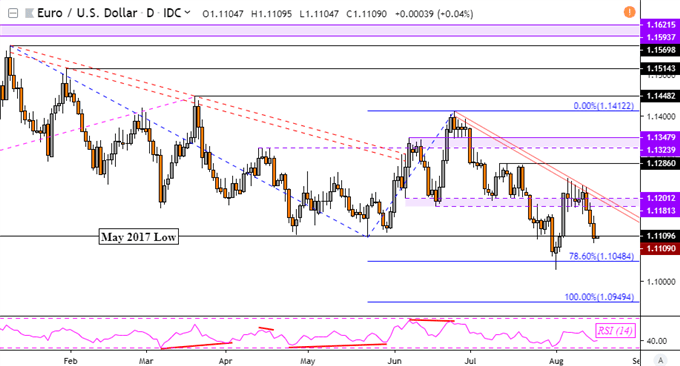 Early into Friday’s session, the New Zealand Dollar is under selling pressure after local July business manufacturing PMI clocked in at 48.2 (a reading above 50 indicates expansion and vice versa). This means that the manufacturing sector contracted for the first since 2012. We also saw local 10-year government bond yields slip below 1% for the first time on record as markets priced in more RBNZ rate cut bets.

Over the past 24 hours, we saw the pro-risk Australian and New Zealand Dollars cautiously rise as Wall Street partially trimmed deep losses from Wednesday’s session. Markets shrugged off news overnight that China is readying to retaliate against additional US tariff threats. This seemed to have been offset by rising bets that the Fed could deliver an aggressive 50-basis point rate cut in September as local bond yields fell.