The sentiment-linked Australian and New Zealand Dollars soared against their major counterparts at the expense of the anti-risk Japanese Yen and similarly-behaving Swiss Franc. Global equities received a sudden jolt of optimism after the office of the United States Trade Representative announced that some of the anticipated $300b tariffs against China at a rate of 10% will be delayed until December.

Since the beginning of this month, heightened trade tensions between the United States and China have been further dampening confidence in the global economy. The latter nation made it clear that it had no intention on bowing to US pressure. China responded by weakening the Yuan past the 7.00 level to help mitigate US tariffs and threatened to halt the purchases of agricultural goods from the world’s largest economy.

The sudden U-turn from US President Donald Trump may be a welcoming sign for business confidence in the near-term, and that was reflected via the surge on Wall Street. The S&P 500 ended the day 1.5% to the upside as sentiment-linked crude oil prices closed at their highest since August 1. But make no mistake, there is still a long way to go if this is the beginning of the unwinding in US-China trade tensions.

Mr Trump has in the past reversed course on a temporary trade truce with China’s President, Xi Jinping, such as after June’s G20 Summit. Meanwhile in the background, aggressive Fed easing bets have begun unwinding. Odds of a 50bps rate cut delivery in September have declined to 11.1% from 31.0% on Monday according to Fed funds futures.

Taking this into consideration, Asia Pacific equities may receive an upside boost on Wednesday. Sentiment may even be further lifted if the People’s Bank of China strengthens the Yuan against the Dollar. This is because the US Treasury Department labeled China as a currency manipulator, and a rise in the Yuan could ease concerns over ongoing spats between the world’s largest economies.

In such circumstances, the anti-risk Japanese Yen may extend its selloff as the sentiment-linked Australian and New Zealand Dollars rally. However, S&P 500 futures are little changed, though they are showing a slight upside bias, perhaps limiting the scope for follow-through in risk trends. AUD/USD will also be closely watching Australian wage and Chinese industrial production figures.

Combining the AUD and JPY, AUD/JPY thus clocked in its best single-day performance (+2.13%) since the beginning of January, or in over seven months. This also followed the downtrend pausing just above May and July 2009 lows at 70.66 which solidified the area is key near-term support. Meanwhile, positive RSI divergence shows fading downside momentum and perhaps preceding a turn higher. 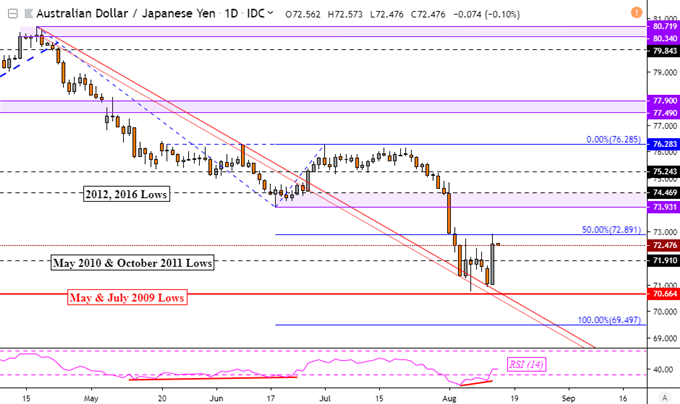