Not sure where the Japanese Yen is heading next? Check out the third quarter fundamental and technical forecast !

The anti-risk Japanese Yen soared as the selloff in global benchmark stock indexes resumed on Monday. Since the beginning of this month, escalating US-China trade tensions have been putting pressure on already-fragile global growth estimates. In response, we have seen central banks across the world respond by cutting rates more aggressively than anticipated such as in New Zealand, India and Brazil.

At the beginning of this week, more developments have been adding to this narrative that poses a threat to emerging markets. In Argentina, the local currency (ARS) and stock index (S&P Merval) collapsed about 15% and 38% respectively. This was on rising fears of a government default after President Mauricio Macri lost the primary election against his opponent Alberto Fernandez.

Meanwhile, risk trends further deteriorated after reports crossed the wires that the People’s Daily – China’s largest newspaper group – is going to publish a “long article” that the nation could defeat “any challenge” and pressure from the United States. As a reminder, earlier this month US President Donald Trump threatened to raise an additional $300b in tariffs against China come September.

The pro-risk Australian and New Zealand Dollars underperformed against their major counterparts. On Wall Street, the S&P 500 tumbled 1.22 percent as odds of a 50bps Fed interest rate cut for September increased to about 28%.

This is unlike what we have seen earlier this year when prospects of support from the central bank lifted US equities from their bottom in 2018. Despite rising odds of further easing, the US Dollar had a mixed session likely owing to some support as a haven currency.

With that in mind, we may see Asia Pacific benchmark stock indexes follow their North American peers to the downsides which could extend gains in the Japanese Yen. The Australian Dollar, which may be vulnerable in this scenario, also has to contend with upcoming business confidence data. A more pessimistic outcome compared to June may further inspire near-term RBA rate cut bets.

Taking a closer look at the USD/JPY daily chart, the currency pair is approaching the “flash crash” low at 104.78. This followed the break under former support between 106.78 and 107.21. This is also in-line with my third quarter Yen technical forecast as the pair looks to confirm a long-term bearish continuation pattern that may result in testing lows from 2016. 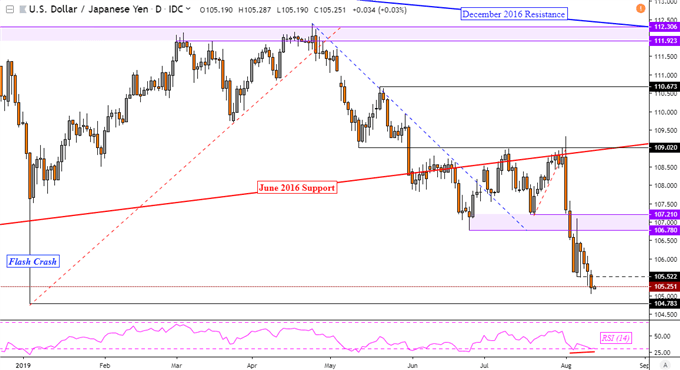