Not sure where Gold is heading next? Check out the third quarter fundamental and technical forecast!

Over the past 24 hours, we have seen multiple examples of central banks surprising markets by cutting rates more aggressively amidst an increasingly-fragile global growth environment. The New Zealand Dollar plunged as the RBNZ delivered a 50-basis point one. Meanwhile, the Reserve Bank of India unexpectedly reduced their reverse repo rate by 35-basis points. Thailand’s central bank also surprised with a 25bps cut.

As Wall Street managed to crawl high enough to nullify downside gaps on Wednesday, one asset to stand tall above the rest was gold. In an environment where the return on Treasuries and currencies diminish thanks to falling interest rates, the yellow metal tends to perform well in these circumstances. This is because gold does not carry any interest-bearing characteristics.

It is also no surprise that despite the S&P 500 ending the day little changed, financials performed the worst of all the sectors (-1.21%). Specifically, it was bank shares that collectively plunged about 2.15%. When the Federal Reserve cuts interest rates to help counter the threat of trade wars to economic growth, that inherently saps banks profit potential. The anti-risk Japanese Yen also performed well over the past day.

XAU/USD just took out April 2013 highs at 1485 with gold being unable to maintain gains above 1500. Using Fibonacci extensions, the next area of resistance appears to be forming under the 78.6% level at 1517. In the event of a turn lower, the midpoint of the extension at 1468 could hold as near-term support. But the dominant uptrend could be maintained by potential rising support from the end of May. 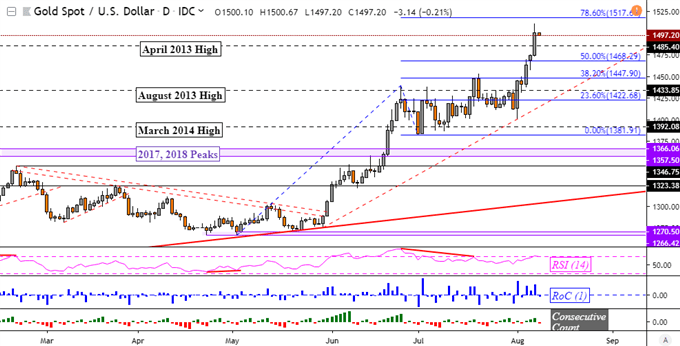 Top-tier event risk during Thursday’ Asia Pacific trading session is China’s latest trade report for July. For the pro-risk Australian Dollar, it will be closely eyeing the data for further insights into the world’s second-largest economy. China is Australia’s largest trading partner and a slowdown from the former can impact the latter. Hence this is partially why we have seen two rate cuts this year so far from the RBA.

Meanwhile the Philippine Peso will be keeping an eye on domestic growth figures. Philippine GDP is expected to clock in at 5.9% y/y in the second quarter. A downside surprise may batter the already-weakened currency given recent escalation in US-China trade tensions. For general risk trends, S&P 500 futures are little changed heading into APAC trade with a cautious upside bias.