Not sure where Crude Oil is heading next? Check out the third quarter fundamental and technical forecast!

The Canadian Dollarunderperformed against its major counterparts over the past 24 hours, sinking alongside sentiment-linked crude oil prices. While Wall Street aimed cautiously higher, reflecting ebbing concerns over US-China trade tensions, uncertainties over the future of demand for oil may have played a part in Tuesday’s selloff given the fragile environment for global growth.

The optimism in financial markets appeared to be a result of China taking measures to quell a selloff in the Yuan so that USD/CNY stays under the key 7.00 level. This may avoid further accusations of currency manipulation from the White House and the uptick in sentiment took its toll on the Japanese Yen. However, slowing world GDP is a more medium-term consequence as a result of prolonged trade wars.

Concerns over the future of demand for oil saw energy sector shares underperform in European and North American benchmark stock indexes. This also had spillover effects for Canada as local front-end government bond yields declined, reflecting rising bets of a Bank of Canada rate cut. After all, crude oil is a key source of revenue for the nation.

The USD/CAD climbed about 0.5% on Tuesday, marking its best performance since the middle of June. Prices pushed into the previous support range between 1.3251 and 1.3291, but failed to breakout to the upside. A close higher opens the door to sustaining the near-term uptrend as the US Dollar targets June 2018 highs against the Canadian Dollar. 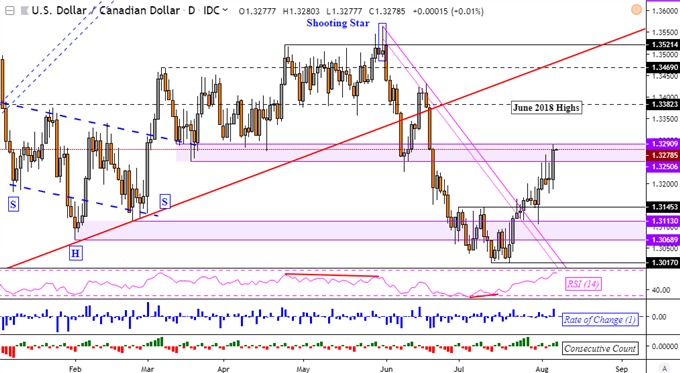 Heading into Wednesday’s Asia Pacific trading session, S&P 500 futures are little changed with a slight downside bias. Overall, this may translate into further consolidation after persistent weakness in equities such as the Nikkei 225.

Meanwhile, the New Zealand Dollar awaits a highly-anticipated rate cut to 1.25% from 1.50% from the RBNZ. Since that outcome is widely expected, forward guidance will be what matters most for NZD/USD. Simultaneously, IG Client Sentiment is offering a further bearish contrarian NZD/USD trading bias.

Join me on Wednesdays at 0:00 GMT as I guide you on how you can use IG Client Sentiment in trading strategies ahead of the RBNZ