Not sure where the Japanese Yen is heading next? Check out the third quarter fundamental and technical forecast !

The anti-risk Japanese Yen and Swiss Franc outperformed against their major counterparts as Wall Street wrapped up its worst week this year. While the S&P 500 dropped nearly ¾ of a percent on Friday, it was European benchmark stock indexes that fared the worst. The Euro Stoxx 50 and DAX tumbled 3.26% and 3.11% respectively.

The source of anguish in financial markets stemmed from an escalation in US trade tensions with the world. Markets were digesting intention from President Donald Trump to slap an additional $300b in Chinese import tariffs on September 1. Meanwhile across the Atlantic Ocean, European markets were trembling ahead of Mr Trump’s statement on EU trade.

It turned out that President Trump signed an agreement to make access for beef exporters to the EU easier. Shortly afterwards however, he added that EU auto tariffs “are never off the table”. Some of the worst-performing majors were the pro-risk Australian and New Zealand Dollars. The US Dollar had a mixed session, falling against JPY and CHF, but doing better against AUD and NZD.

In this case, trade war fears worked to overpower market reaction to Friday’s US jobs report. It was a mixed bag with the country adding fewer jobs than expected as unemployment rose, but wage growth saw an uptick alongside labor force participation. The markets are now fully anticipating another Fed interest rate cut in September to help offset the consequences of higher taxes consumers may expect from the tariffs.

This resulted in USD/JPY closing at its lowest since April 2018 after it cleared a critical psychological barrier between 106.78 and 107.21. As such, the Japanese Yen may extend gains against the US Dollar ahead as it looks to confirm a long-term bearish continuation pattern outlined in the third quarter technical forecast. Given downside confirmation, we may see USD/JPY descend further into January “flash crash” lows. 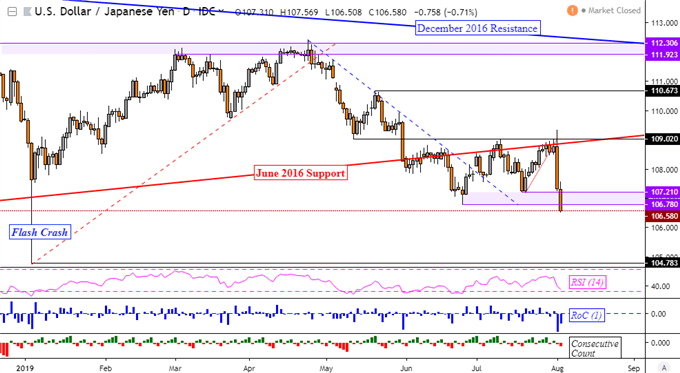 As Wall Street wrapped up on Friday, Donald Trump said that he could raise tariffs on China to a “much higher number”. As such, we may see Asia Pacific benchmark stock indexes follow lower in continued risk aversion. This would support the fundamental backdrop for continued appreciation in the Japanese Yen. The Australian Dollar is thus vulnerable, with it also eyeing Caixin China PMI services data ahead.