AUD/USD, AUD/JPY May See 2009 Lows if China Retaliates US Tariffs

Not sure where the US Dollar is heading next? Check out the third quarter fundamental and technical forecast!

The already-fragile financial markets, after the Federal Reserve disappointed dovish expectations yesterday, were dealt a bigger blow when US-China trade war tensions dramatically escalated over the past 24 hours. On Thursday, US President Donald Trump said that the nation will proceed with implementing additional 10% tariffs on the remaining $300b of highlighted Chinese imports come the beginning of September.

This came as a surprise to markets as yesterday the US reported that trade talks in Shanghai were “constructive”. Both the S&P 500 and Dow Jones closed about 1% lower. Something to keep in mind is that Mr Trump has also spent recent days undermining the trade truce reached with China at the G20 Summit in June. He mentioned that he was “not sure” that he could accept an offer from his Chinese counterpart.

Fed funds futures now show that 25 basis point rate cut bets for September soared to above 90% confidence. At the same time, the closely-watched segment of the US yield curve – 10-year and 3-month spreads – inverted to its most negative since early July as US recession fears rose. Yet, the US Dollar still stood tall against its major counterparts as a premium for liquidity and haven demand benefited the Greenback.

The worst-performing major was the Australian Dollar. An escalation in US-China trade wars places further pressure on the RBA to consider a third rate cut this year. China is Australia’s largest trading partner and increasing signs of weakness in the former can have knock-on effects on the latter. This is in addition to hindering Australia’s mineral-heavy economy that is tied to the global business cycle.

The AUD/USD has extended its aggressive losing streak to 10 consecutive days, the last this was achieved was back in May of 2013. Moreover, the Aussie has also cleared the near-term support barrier between 0.6827 and 0.6865, opening the door to reaching March 2009 lows and beyond. 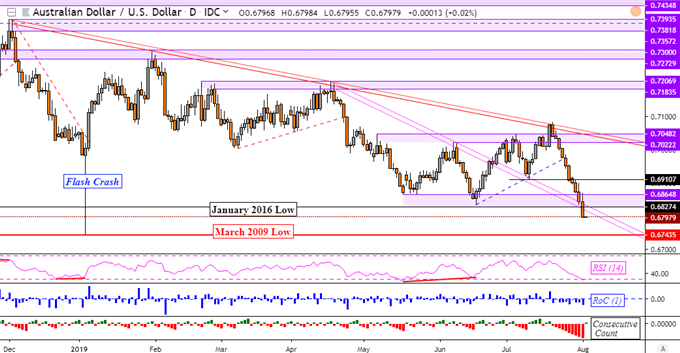 After much consolidation since May, AUD/JPY has finally broken under the psychological barrier between 73.93 and 74.47. At times of aggressive uncertainty in financial markets, the anti-risk Japanese Yen can often benefit which makes it a prime candidate against the Australian Dollar as the pair eyes 2009 lows too. 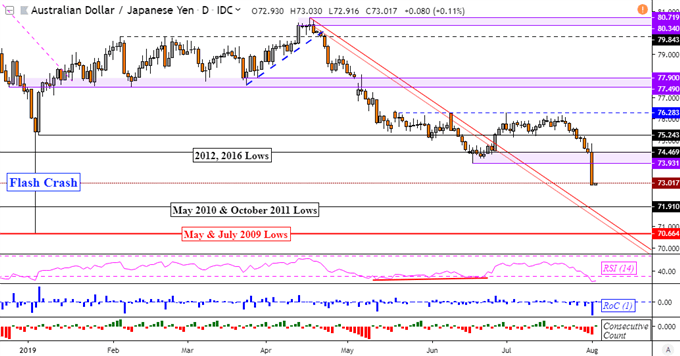 S&P 500 futures are pointing lower heading into Friday’s Asia Pacific session, hinting that regional bourses may follow the pessimistic lead from Wall Street. The sour mood may be amplified if China, the world’s second-largest economy, announces further retaliation against US measures which has usually been the case in the past. As such, this leaves the AUD at risk to further losses and the JPY continues its course higher.