Not sure where gold is heading next? Check out the third quarter fundamental and technical forecast!

For the first time since 2008, the Federal Reserve has reduced benchmark lending rates in the world’s largest economy. Yet the US Dollar and government bond yields rallied, picking up pace as Chair Jerome Powell held his press conference after the 25 basis point rate cut. Based on his commentary and voting by policy setters, it was clear that the markets were left wanting more on a less-dovish central bank.

The most notable point that Mr Powell arguably made was that Wednesday’s action was not the beginning of a lengthy cutting cycle. This is even as the central bank pauses the unwinding of its balance sheet two months early on August 1. Rather, their actions had more to do with being preventative maintenance to sustain growth that is at risk to global uncertainties, trade wars and inflation undershooting estimates.

Equities took a hit, with the S&P 500 clearing a near-term rising support channel. This is also despite US-China trade talks concluding in Shanghai. Markets were unimpressed, as anticipated, when earlier today the two nations reported discussed topics such as agricultural trade and the US reported negotiations as “constructive”. Meanwhile, anti-fiat gold prices sunk as the appeal of non-interest-bearing assets faded.

Taking a closer look at XAU/USD, the precious metal once again finds itself under the near-term rising support line from June. As mentioned in this week’s gold technical forecast, confirming further closes below this trend line opens the door to a top that has been in the making since the Bearish Engulfing candlestick earlier in July. The next area of support from here appears to be 1381.91, just under March 2014 highs.

To add to this bearish argument, the latest readings from IG Client Sentiment are offering a gold-bearish contrarian trading bias. To learn more about how to use sentiment in your own trading strategy, join me each week on Wednesday’s at 00:00 GMT as I uncover what IG Client Sentiment has to say about the prevailing trends in financial markets and follow me on Twitter here @ddubrovskyFX for timely updates!

XAU/USD – Chart of the Day 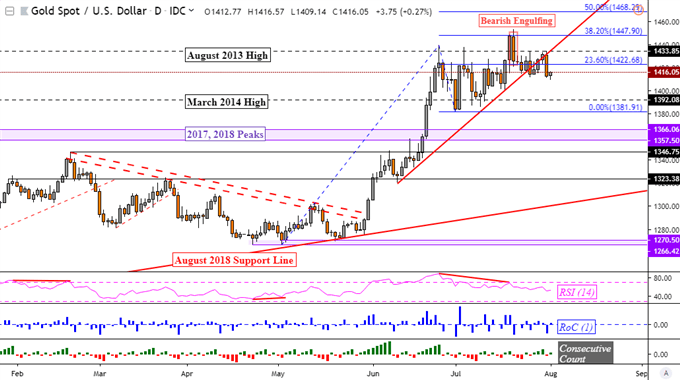 With that in mind, S&P 500 futures are pointing notably lower heading into Thursday’s Asia Pacific trading session. This may translate into further risk aversion which may benefit the anti-risk Japanese Yen and highly-liquid US Dollar. The pro-risk Australian Dollar is thus left vulnerable as it also eyes upcoming Caixin Chinese Manufacturing PMI data given the RBA’s data-dependent approach.