Not sure where the Euro is heading next? Check out the third quarter Euro fundamental and technical forecast !

Risk Aversion Rattled Markets Ahead of the Fed

Risk aversion rattled financial markets over the past 24 hours, with European benchmark stock indexes closing deep in the red. Disappointing earnings from Lufthansa (a German airline) and Centrica (a British electric services company) saw their shares collapse about 6% and 19% respectively. Then, the attention shifted to renewed trade war fears.

Before US officials meet their Chinese counterparts in Shanghai for negotiations, President Donald Trump spooked markets when he mentioned that the problem with China is that “they just don’t come through”, complaining that they aren’t buying agricultural goods as promised. More uncertainty over the outlook for global growth was added when he mentioned that he is “not sure” if he will accept China’s offer in talks.

The S&P 500 closed about 0.26% to the downside while the highly-liquid US Dollar had a mixed session. It underperformed against the Euro, where the latter saw strength after preliminary German CPI beat expectations (1.7% y/y in July versus 1.5% anticipated). Against the pro-risk Australian and New Zealand Dollars though, the Greenback gained but it weakened against the anti-risk Japanese Yen.

The EUR/USD gained for a second day in a row as it appeared to confirm a Piercing Pattern, which carries bullish implications. This also follows another failed attempt to breach key support which is a range between 1.1110 and 1.1132. While this may pave the way for a retest of near-term descending resistance from late June, the close proximity of the Federal Reserve rate decision is clouding the fundamental outlook.

EUR/USD – Chart of the Day 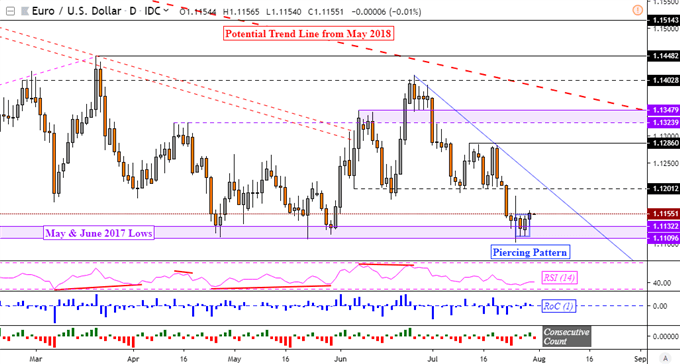 During Wednesday’s trading session, we will get the latest Chinese manufacturing PMI and Australian CPI data. This could make for a volatile session for the Australian Dollar, especially with the Reserve Bank of Australia carefully monitoring economic news flow as it gauges whether or not it might be appropriate to pursue further interest rate cuts.

The proximity of the Fed, due in less than 24 hours, could make for choppy trade as investors hesitate to commit to large positions. Afterall, the trajectory for lending conditions from the central bank associated with the world’s largest economy has major implications for financial markets across the board. For example, if they were to surprise less dovish, that might mean more aggressive easing from the RBA.