Why the Euro, Dollar Rally After the ECB? Leaving EURUSD at Support

The Euro was at one point on its way to close at its lowest point against the US Dollar since 2017 as the ECB rate decision seemed to prepare markets for further stimulus later this year. Not only did policymakers see rates at present or lower levels for “as long as needed”, but also the central bank showed that it is looking to examine options for "potential new asset buying", also known as quantitative easing.

Looking at overnight index swaps, chances of a 10 basis point rate cut now stand at about an 85% probability for September, with further easing at even odds by year-end. Afterwards, ECB’s President Mario Draghi also had plenty of gloomy things to say about the economic outlook such as it is “getting worse and worse”, highlighting particular concerns over manufacturing.

Yet, accompanying his speech was not only a reversal in EUR/USD, but also in Eurozone front-end government bond yields. This signaled that dovish bets were underwhelmed and were contained by Mr Draghi. He did note that there were different nuances of views on parts of a package as risks of a recession are “pretty low”. As such, this means we will have to wait until September for further specifics and data.

There was also a rally in USD eyeing an equally-weighted index against its top 4 liquid major counterparts. This occurred as local front-end government bond yields climbed as the S&P 500 ended the day 0.53% to the downside. Better-than-expected US durable goods orders, coupled with ECB disappointment, likely fueled a comeback in the Greenback as anti-fiat gold prices weakened. 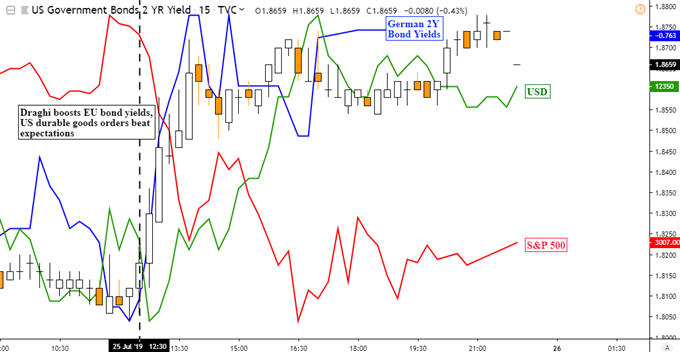 While Wall Street underperformed, S&P 500 futures are little changed heading into Asia Pacific trading hours. Some pessimism in equities from earlier might have been cooled as the US House of Representatives passed a debt-limit and budget deal, sending it to the Senate. A relatively quiet economic docket ahead places the focus for currencies on risk trends.

The EUR/USD wasn’t able to clear critical support which is a range between 1.1110 and 1.1132. This area is the lows achieved back in May and June of 2017. In the past, failure to breach support resulted in a temporary rebound, but the dominant downtrend held. Keep in mind that past performance is not indicative of future results. Near-term resistance appears to be at 1.1201. 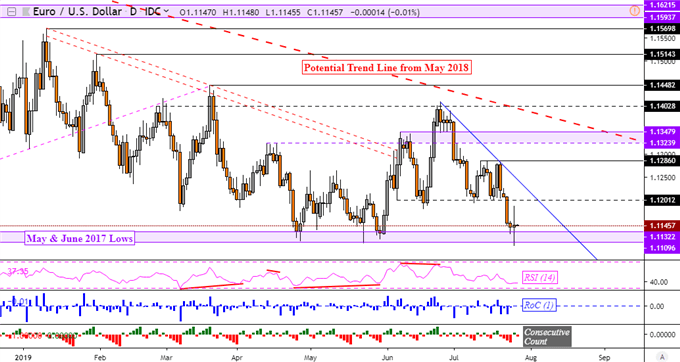