Financial markets were rocked during the final moments of last week as a combination of monetary policy themes and Middle East tensions resulted in the worst 5 days for the S&P 500 since late May. For starters, US front-end government bond yields rallied on Friday as markets unwound aggressive Federal Reserve July rate cut expectations as John Williams clarified previously incorrectly-interpreted dovish comments.

Then, heading into the final hours of the week, Iran’s Revolutionary Guard reportedly seized two oil tankers in the Strait of Hormuz. US-Iran political tensions have been increasing since the former nation withdrew from the Joint Comprehensive Plan of Action. Sentiment-linked crude oil prices rallied on supply disruption concerns, diverging from declines in the S&P 500 on rising worries over a conflict.

Unsurprisingly, both of these developments proved to be supportive for the world’s most liquid currency, the US Dollar. Though it pared some of its gains towards the end of the session. On the flip side of the spectrum, we saw the pro-risk Australian Dollar underperform. In fact, technically AUD/USD’s upside push this past week was tamed by a falling trend line from 2018 which kept the downtrend intact.

Given this news, Asia Pacific markets may begin the week in a sour mood which would compound Aussie selling pressure. A quiet economic docket at the beginning of the new week works to place the focus for foreign exchange markets on risk trends. This may work to benefit the anti-risk Japanese Yen in the event of carry trade unwind.

The S&P 500, from a technical standpoint, is showing numerous bearish reversal warning signs. The most prominent is what appears to be a Head and Shoulders pattern in the making, with an Evening Star composing the head of the candlestick formation. This followed the presence of negative RSI divergence, which indicated fading momentum to the upside. A break under 2971 exposes 2947, former 2018 resistance. 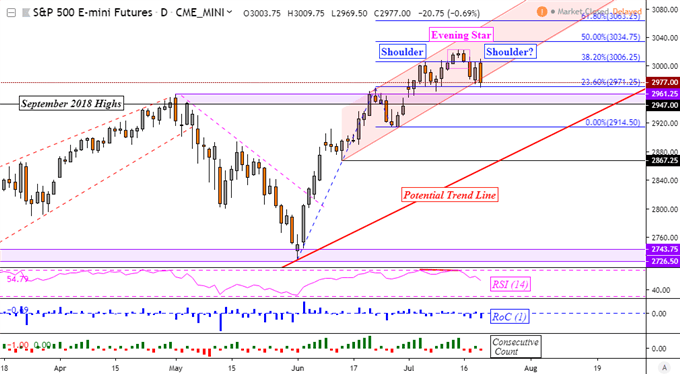