Not sure where crude oil prices are heading next? We recently released the third quarter Crude Oil fundamental and technical forecast!

The Canadian Dollar underperformed against its major counterparts as odds of a BoC rate cut by year-end climbed to about 45% on Monday from 33% at the end of last week. Indeed, Canadian front-end government bond yields traded to the downside over these past 24 hours. The cause of these bets seemed to stem from external factors as crude oil prices suffered their worst day in almost two weeks.

Turning our attention towards the US, the S&P 500, while gapping to the upside, spent the rest of its day trading lower as it finished little changed from Friday’s close. Examining the sectors, the index was led lower by financials. More specifically, banks declined over one percent despite Citigroup reporting an EPS beat of $1.83 versus 1.80 expected as second quarter revenue climbed 2% y/y.

However, trading revenue dropped roughly 5% as CFO Mark Mason fretted about trade wars and the Fed stance weighing on client sentiment. At one point, Citigroup shares were down about 2.32% after market open. While the stock pared losses, those of JPMorgan and Wells Fargo, ahead of their earnings report on Tuesday, sunk and stayed lower. This might reflect the markets anticipating similar frets from them ahead.

Moreover, on the chart below, US bond yields declined as markets remain concerned over the outlook from the Federal Reserve and global growth. This works to dampen demand prospects for sentiment-linked crude oil prices. Meanwhile, the commodity is a key revenue for Canada and thus can impact domestic monetary policy. All eyes for the Loonie are on this week’s Canadian CPI report.

Chart of the Day – Sentiment Dragged Down by Bank Shares 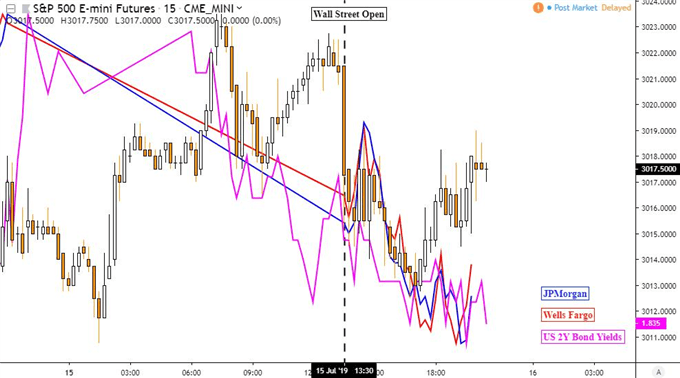 S&P 500 futures are little changed ahead of Tuesday’s Asia Pacific trading session. This places the focus on key fundamental event risk for currencies ahead. Most notably are the New Zealand CPI report and latest minutes from the RBA rate decision earlier this month. For the former, the RBNZ’s data-dependent approach leaves NZD/USD vulnerable to volatility given a surprise deviation from expectations.