The US Dollar extended its decline from Wednesday despite better-than-expected CPI data earlier this week, and similar rosy wholesale inflation data on Friday. PPI (excluding food and energy) clocked in at 2.3% y/y in June versus 2.1% anticipated. These data prints helped to somewhat cool muted inflationary concerns that the Federal Reserve has brought up as of late.

Yet, local bond yields declined and the S&P 500 rose, signaling rising bets of easing. This may have been due to dovish notes from policymakers after similar remarks from Chair Jerome Powell. Chicago Fed President Charles Evans said that he could argue for rate cuts on inflation and the slowdown in global growth. Then, Richmond Branch President Thomas Barkin added that risks are “more tilted” to the downside than balanced.

This worked to bolster the pro-risk Australian and New Zealand Dollars as they rallied with equities. The AUD and NZD still have relatively high rates when looking at the FX majors, and that is underpinned when those in the US start falling given that there is more room to weaken there. They struggled to find much upside momentum against the anti-risk Japanese Yen due to stock weakness during the European session.

Gains from the Wall Street trading session may continue supporting the Aussie and Kiwi should Asia Pacific equities follow suit. However, the Australian Dollar could weaken if upcoming second quarter Chinese GDP data disappoints. China is Australia’s largest trading partner and economic weakness from the former could adversely impact conditions in the latter, perhaps causing the RBA to consider cutting rates again sooner.

Given this fundamental risk for AUD/USD in the near-term, the currency pair could be looking for a turn lower after resistance held at the lower bound of 0.7022. Such an outcome places near-term support at 0.6911. Otherwise, keep an eye on outer horizontal resistance at 0.7048 which if taken out, exposes the peaks from late April. 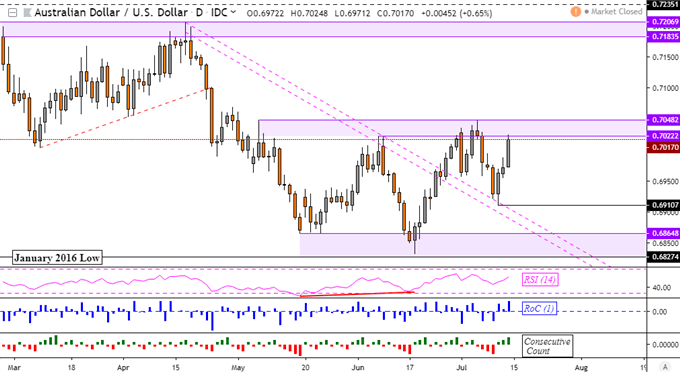