Not sure where GBP/USD is heading next? We recently released the third quarter British Pound fundamental and technical forecast!

Against the US Dollar, the British Pound closed at its weakest since April 2017. Sterling has been under persistent pressure against the backdrop of deteriorating economic news flow from the United Kingdom coupled with fears of a disorderly “no-deal” Brexit. Over the past 24 hours, we also saw a survey from Economists that the country’s GDP could contract 0.1% q/q in the second quarter.

Meanwhile, the roughly 160k members of the UK Conservative Party are voting for their next Prime Minister over these next few weeks. Favored candidate Boris Johnson, who promised to withdraw the UK from the EU by the October 31 deadline, is going against Jeremy Hunt. If a “no-deal” Brexit is perceived as the more likely outcome, Sterling could be in for a rough ride ahead.

Taking a closer look at GBP/USD, while the pair has managed its lowest close since April 2017, it is still sitting within range support between 1.2442 and 1.2478. Meanwhile, positive RSI divergence warns of fading momentum to the downside. This could make for a challenge breaching this psychological barrier before going on to test April 2017 lows at 1.2366. 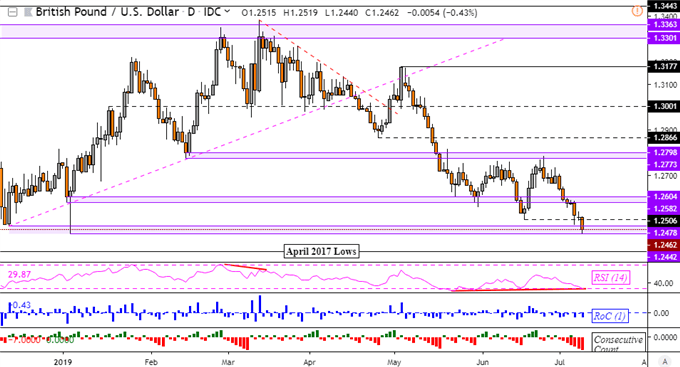 The Mexican Peso was particularly hit these past 24 hours after it emerged that Mexican Finance Minister Carlos Urzua resigned. He noted discrepancies on economic matters with President Manuel Lopez Obrador, fueling concerns about political instability. USD/MXN shot higher as it tested rising support from July 2017.

Meanwhile, the Indian Rupee saw some selling pressure after US President Donald Trump tweeted that Indian tariffs on American products are “no longer acceptable”. Though prior gains in the Nifty resulted in a solid day for the Rupee. Rising tensions between the US and India risks reversing the dominant downtrend seen in USD/INR.

Top-tier event risk during Wednesday’s Asia Pacific trading session is June’s Chinese inflation report. CPI is anticipated to clock in at 2.7% y/y, in-line with May’s outcome. Though persistent underperformance in data outcomes relative to expectations may foreshadow an underwhelming outcome. Fears of slowing price growth and economic activity could induce risk aversion and bode ill for the Australian Dollar.

The pro-risk Aussie underperformed these past 24 hours as stocks aimed lower. Though during the Wall Street trading session, we saw the S&P 500 pare its downside gap as anticipated via net short bets. Net long AUD/USD positioning is however offering a bearish contrarian trading bias and this may precede further declines in the pair.

Join me every week on Wednesday’s at 00:00 GMT as I show you what market positioning is revealing about the prevailing trends in markets!