Not sure where stocks are going next? We just released the third quarter equities fundamental and technical forecast!

The pro-risk Australian and New Zealand Dollars rallied with equities heading into the US Independence Day holiday. Despite risk aversion during the Asia Pacific trading session as South Korea trimmed inflation and growth estimates, that quickly turned around as European markets came online. This may have been due to stocks digesting nominations to institutions such as IMF’s Chief Christine Lagarde to be head of the ECB.

The S&P 500 and Euro Stoxx 50 ended the day 0.77 and 0.93 percent to the upside. Meanwhile, the VIX “fear gauge” fell to its lowest since late April. During the Wall Street session, we saw a rally in front-end government bond yields pick up pace, reflecting ebbing demand for haven assets. Yet, this euphoria was accompanied by acute softer US ISM non-manufacturing PMI and a deeper inversion of the yield curve.

Taking a closer look at NZDUSD on the daily chart below, we can see that recent declines from earlier this week were stemmed by a rising trend line from the middle of June. As the currency pair struggles pushing above former support-turn-resistance at 0.6706, keep in mind that confirming closes to the upside validates a Double Bottom bullish reversal pattern that may bring the New Zealand Dollar to March highs. 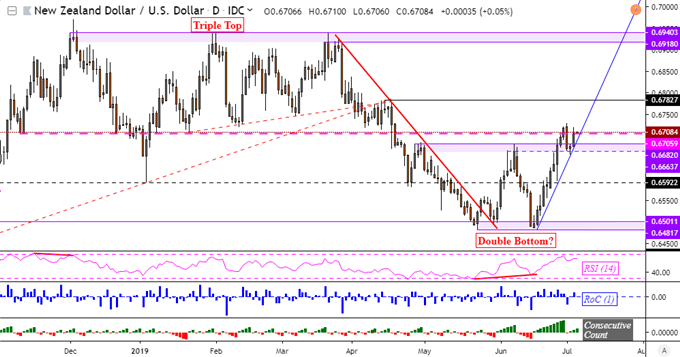 It is possible that markets, ahead of reduced liquidity conditions, could be betting on looser credit conditions from the United States with the local non-farm payrolls report due just around the corner on Friday. Economic outcomes relative to expectations in the world’s largest economy are still tending to increasingly disappoint, underpinned by the latest ISM report. This may open the door to a softer outcome.

S&P 500 futures are pointing cautiously to the upside heading into Thursday’s Asia Pacific trading session, and gains in equities such as the Nikkei 225 may bode ill for the anti-risk Japanese Yen. At the same time, this may extend advances in AUDUSD and NZDUSD. Be mindful of reduced liquidity, a sudden surprise announcement regarding trade talks from the US could induce “flash crashes” akin to early January.