Not sure where the British Pound is going next? We just released the third quarter GBPUSD fundamental and technical forecast !

The British Pound was the worst-performing major on Tuesday, tumbling as Bank of England Governor Mark Carney spoke in Bournemouth. What caught the eye of investors was when he mentioned that global trade tensions increased downside risks. He also offered a rather disappointing outlook for second-quarter economic growth, seeing it as “considerably weaker”.

According to overnight index swaps, odds of a BoE rate cut by year-end shot up to nearly 50 percent from about 25 yesterday. While the central bank has been in favor of hiking rates, the threat of a “no-deal” Brexit is keeping them on hold for the time being. In fact, Mr Carney even mentioned that it is “unsurprising” that the markets are envisioning a lower interest rate.

This leaves GBPUSD once again aiming towards the January “flash crash” low in its downtrend since March. However, the pair has been oscillating between 1.2582 and 1.2798, with a false downside breakout through the former that left a low at 1.2506. A close under 1.2582 opens the door to testing 1.2506 before attempting to find lows last seen in 2017. 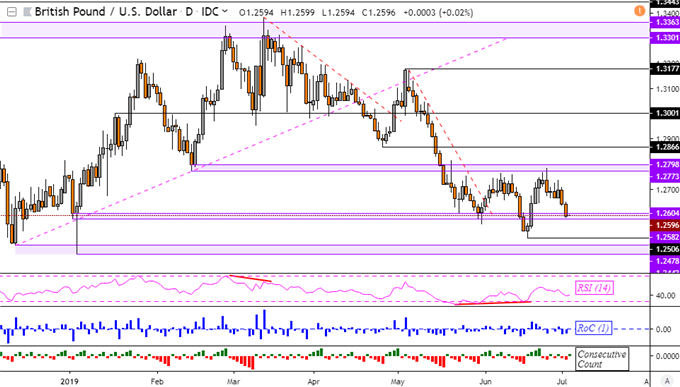 Meanwhile, the anti-risk Japanese Yen outperformed against its major counterparts. The decline in USDJPY picked up pace shortly after Mark Carney spoke as US government bond yields declined and anti-fiat gold prices rallied absent a clear catalyst. In fact, the precious metal experienced its best performance in a day since June 2016, climbing over 2.5 percent.

After yesterday’s RBA rate cut that left Australian Dollar bears disappointed, Aussie traders will be closely watching upcoming Caixin China PMI outcomes after official manufacturing surveys pointed to a contraction in the sector earlier this week. Data has been tending to underperform relative to expectations in the world’s second-largest economy and more of the same could sink AUDUSD.

However, IG Client Sentiment is currently offering a stronger AUDUSD-bullish contrarian trading bias given the unwinding in net-long positioning as traders pile into favoring shorts. To learn how you can use this tool in your trading, join me every week on Wednesday’s at 00:00 GMT for live sessions where I will also be taking a look at what it has to say about the prevailing trends in markets.