Not sure where the Euro is going next? We just released the third quarter EUR fundamental and technical forecast!

EURUSD is aiming narrowly lower as the White House proposed pushing an additional $4b in tariffs against the European Union, shortly after the US reached a trade truce with China from this weekend’s G20 Summit. According to the United States Trade Representative, the purpose of these if to “enforce US rights in the WTO against the EU” over aircraft subsidies.

The timing of the tariff threat is very interesting, just last week the EU launched INSTEX which is a vehicle for Iran to sidestep sanctions that the US imposed on them. This sent crude oil prices lower after being unable to clear a falling trend line from April as this cooled supply disruption concerns. More to the point, this may offer another reason for Trump to retaliate against the EU which may further sink the Euro.

After the biggest loss in a single day for EURUSD since March (-0.76%), the pair could be looking at further declines to near-term support next. This is a combination of the former falling resistance channel from the beginning of this year and what could be a potential rising trend line from late May (blue line below). On the other hand, near-term resistance appears to be well solidified at 1.1403. 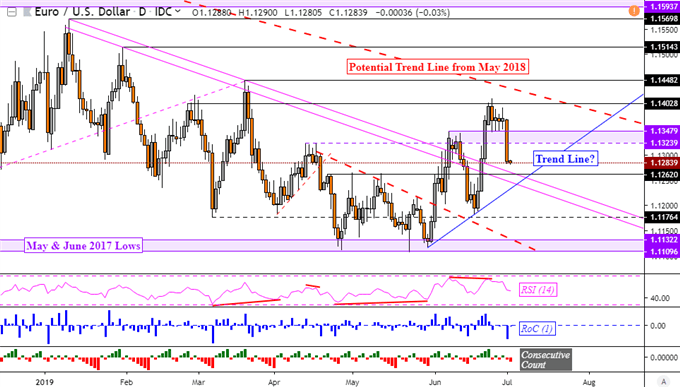 The US Dollar outperformed against its major counterparts, with DXY clocking in its best day since March (+0.7%). It saw initial strength at this week’s market open where “risk-on” trade followed this weekend’s G20 Summit in Osaka, Japan. There, the world’s largest economic superpowers agreed to a trade truce, restarting talks for the time being.

While this offered a boost to equities, follow-through was notably underwhelming. The S&P 500, while gapping higher, spent most of its day trading lower and ended just 0.77% to the upside. This may have been due to ebbing dovish Fed monetary policy expectations which offered USD a boost as local 2-year government bond yields rallied. Better-than-expected ISM PMI data also didn’t hurt.

S&P 500 futures are now pointing deeper into negative territory and the anti-risk Japanese Yen is aiming higher against its major counterparts. More of the same appears to be ahead. Meanwhile, the pro-risk Australian Dollar is looking to an RBA rate cut that is 86% priced in by overnight index swaps. Needless to say, a rate hold will likely bolster the Aussie. But, the focus will be on whether or not the central bank could deliver another one by year-end.

I will be covering the Australian Dollar and how it responds to the RBA beginning at 4:15 GMT, come and join where I will also be taking a look at the AUDUSD outlook!