Not sure where the Japanese Yen is going next? We just released the third quarter JPY fundamental and technical forecast!

Yen May Weaken as the US, China Agree to Restart Trade Talks From G20 Summits

The anti-risk Japanese Yen may weaken at the beginning of the new week as markets digest a US-China trade truce. From this weekend’s G20 Summit, US President Donald Trump withheld raising roughly an additional $300b in Chinese import tariffs. From here, the US and China will restart trade talks as Mr Trump said that the latter nation will purchase additional agricultural goods from the former.

While equities such as the Nikkei 225 may rally at open, it is unclear if there is enough fundamental support for follow-through. For one thing, the current 25% tariff rate on roughly $250b Chinese goods exported to the US still remains and anticipation of a trade truce helped stocks rally this past week to an extent. Then, it remains to be seen if this can pour cold water on aggressive Fed rate cut bets. That may sink sentiment.

Such anticipation in the lead-up to this weekend’s G20 Summit left the US Dollar ignoring the latest gauge of the Fed’s preferred measure of inflation (core PCE), which clocked in at 1.6% y/y in May versus 1.5% expected. The Canadian Dollar also paid not much attention to softer than expected local GDP data where growth printed 1.5% y/y versus 1.6% anticipated.

The same could not be said for crude oil when the European Union launched INSTEX, the mechanism “aimed at facilitating legitimate business with Iran”. It serves as a way for Iran to sidestep sanctions the US imposed on them. Oil sunk on the announcement as this cooled supply disruption concerns. But, this may come back to haunt the EU and local markets if US President Donald Trump retaliates.

Focusing on technical analysis, crude oil prices turned lower on Friday after the falling trend line from April tamed its uptrend as anticipated. The rise to the trend line was initiated by an upside breakout through the falling resistance line from May (red line below). If near-term support holds, keep an eye on resistance at 60.26 just above the trend line. Confirming a close above it paves the way for uptrend extension. 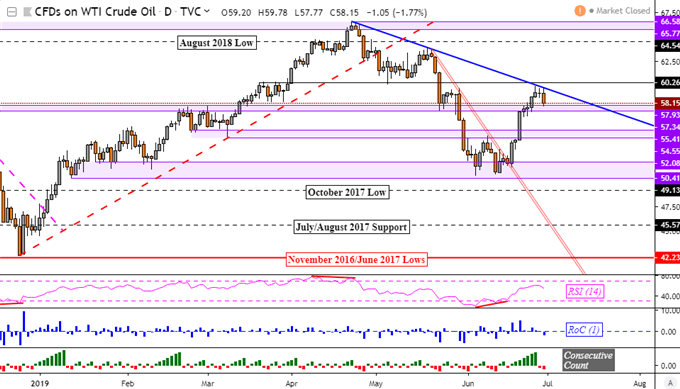