NZDUSD May Extend Longest Winning Streak Since 2013 as G20 Nears

Equities and foreign exchange markets were relatively sanguine despite a slew of disappointing US economic data. GDP clocked in at 3.1% q/q in the first quarter versus 3.2% expected. Meanwhile personal consumption, which accounts for about two-thirds of economic growth, printed just 0.9% versus 1.3% anticipated. This is also the softest outcome since the first quarter of 2018.

The slew of pessimistic data did not end there though, initial jobless claims unexpectedly rose 227k this past week versus compared to 220k anticipated. That was the largest increase since early May. Pending home sales also fell short of expectations, clocking in at -0.8% y/y in May. Declines in local government bond yields throughout the day reflected investors seeking safety.

Yet, the S&P 500 and the pro-risk Australian and New Zealand Dollars aimed cautiously higher. Though it was not without hiccups or smooth sailing. There were partial retracements during European trading hours. It seems as though markets are highly anticipating a US-China trade truce ahead of talks between Presidents Donald Trump and Xi Jinping at the upcoming G20 Summit.

NZDUSD has now climbed for 10 consecutive days in its best winning streak since April 2013. It recently surpassed the outer bound of a range of resistance between 0.6664 and 0.6682. Moreover, it appears to be confirming a Double Bottom bullish reversal candlestick pattern on the chart below. As such, this opens the door to testing 0.6783 in its uptrend. 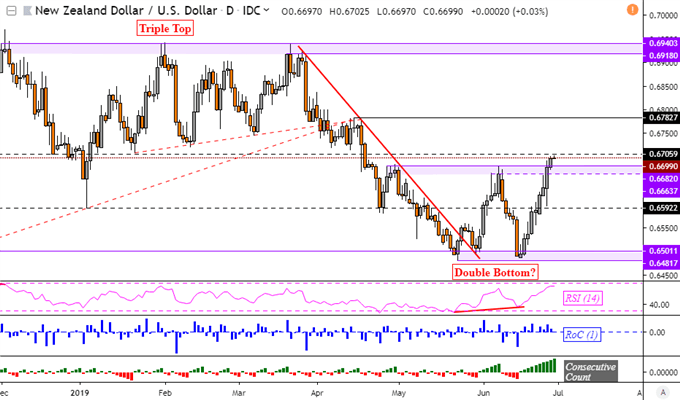 S&P 500 futures are pointing narrowly to the upside heading into Friday’s Asia Pacific trading session. Though lasting follow-through for equities to the upside would probably have to wait until the beginning of next week when we will get a better idea of US-China trade talks. Meanwhile, the Indian Rupee is vulnerable to escalating tensions between Washington and Delhi.