The anti-risk Japanese Yen and Swiss Franc underperformed against their major counterparts on Wednesday despite a lackluster performance in global stock markets. Nikkei 225 and S&P 500 futures soared during the European trading session as US Treasury Secretary Steven Mnuchin, who ahead of this week’s G20 Summit, said that “we were about 90% of the way” regarding a trade deal with China.

He added that he is “hopeful that we will see a deal” and that Donald Trump and his counterpart Xi Jinping “have a close working relationship”. Yet, the upside momentum in equities was unable to be maintained and the S&P 500 and Euro Stoxx 50 ended the day cautiously lower. Given pronounced weakness in JPY and CHF earlier in the day, they were unable to fully retrace their steps.

This isn’t the first time Mr Mnuchin commented about rosy progress in trade talks. Back in April, he noted that the two nations were nearing the final round. Then, Trump went ahead with raising more tariffs on Chinese imports in May. Also, momentum in equities fell apart today as worse-than-expected US durable goods orders crossed the wires, underpinning concerns about the health and vigor of the economy.

USDJPY clocked in its best day since April 11, rising over 0.55 percent these past 24 hours. But, the dominant downtrend from April still holds, guided lower by a falling trend line (blue line below). This also follows a break under a rising trend line from June 2016. The pair needs further progress to the upside to argue of a technical reversal. Meanwhile, its recent bottom at 106.78 looks to be psychological support. 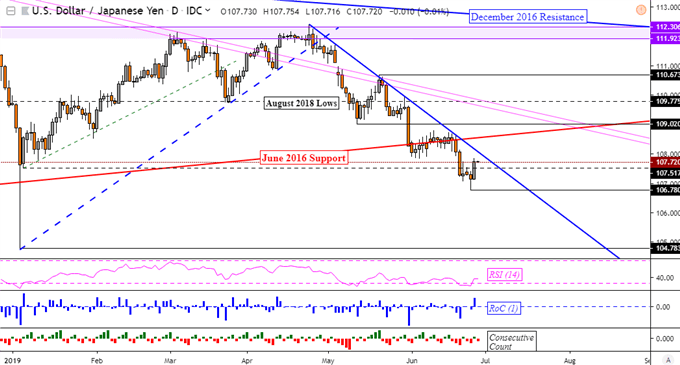 S&P 500 futures are little changed, pointing to a mixed start for equities during Thursday’s Asia Pacific trading session. A lack of critical economic event risk places the focus for currencies on sentiment. Markets are awaiting the G20 Summit later this week. US President Donald Trump will talk trade with not just China, but also India where USDINR could reverse due to the risk of escalating trade tensions.