Crude oil prices, despite the high volatility in equities today, paid the most attention to projected estimates from weekly API oil inventory data. They indicated a contraction of 7.55m barrels, more than 2.5 times the drawdown estimated by official EIA statistics for tomorrow. Those point to an outflow of just about 2.84m barrels. An outcome closer to EIA estimates may send the commodity lower.

Sentiment-linked crude oil brushed aside the 0.95% decline in the S&P 500 during Tuesday’s Wall Street trading session. Commentary from St. Louis Fed President James Bullard added pressure to already-sinking equities. While he mentioned that holding rates in June “puts a really high July probability”, he said that the situation “does not call for a 50 basis point rate cut”, undermining aggressive dovish policy bets.

The US Dollar thus got a boost as it paused recent aggressive declines above support at 95.95 when looking at DXY. This also led to a pullback in pro-risk currencies such as the Australian and New Zealand Dollars after recent gains. Fed Chair Jerome Powell also spoke but reiterated much of the language from this month’s FOMC statement. A report from Reuters that the US and China could have a “reasonable chance” to agree to talks at G-20 this week offered little to improve sentiment.

On the daily chart, crude oil has extended its near-term recovery of over 15 percent into its 6th day, taking out resistance at 57.93. This comes after clearing a near-term falling channel of resistance earlier this month. From here, oil could be looking to test a potential descending trend line from the middle of April which is the blue line below. This is also in-line with bullish-contrarian price signals indicated by IG Client Sentiment. 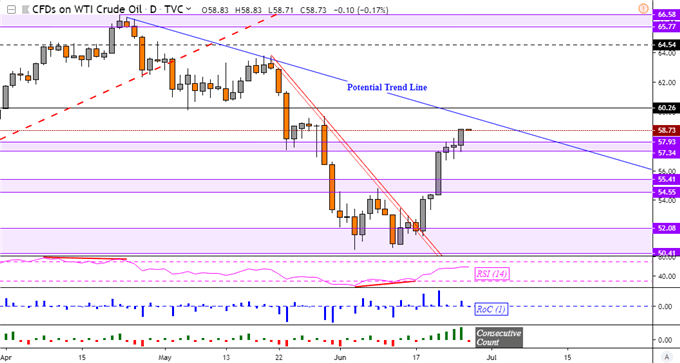 With that in mind, weakness from Wall Street could permeate in Asia Pacific equities during Wednesday’s trading session. That could bode well for the anti-risk Japanese Yen. Meanwhile, the New Zealand Dollar is looking to the upcoming RBNZ rate decision. Expectations are for a hold, with overnight index swaps pricing in a 75% chance of a cut in August. Dovish commentary that supports this may sink NZDUSD.

Join DailyFX Analyst David Cottle LIVE at 1:45 GMT as he covers the RBNZ rate decision and outlook for the New Zealand Dollar!