Gold prices are up over 11 percent from the bottom in late April, extending recent aggressive behavior as US government bond yields continue falling in the aftermath of last week’s Fed monetary policy announcement. On Monday, it was no different as the anti-fiat precious metal climbed and the US Dollar aimed cautiously lower.

Yet, Wall Street was unable to capitalize on prospects of easing from the central bank, with a July interest rate cut fully priced in by Fed funds futures. The S&P 500 fell 0.17 percent as it kept struggling to hang on to a record-high close. The spread between 10-year and 3-month bond yields, which remains inverted since May 23, widened after narrowing for three days in a row, possibly indicating rising bets of a US recession.

Looking at a gold daily chart, XAUUSD confirmed another close above the March 2014 high at 1392. Prices are quickly approaching the August 2013 high at 1433. From a technical standpoint, gold’s upside momentum picked up pace after testing the rising support line from August 2018, further solidifying it as key support in the event of a downturn in the medium-term. 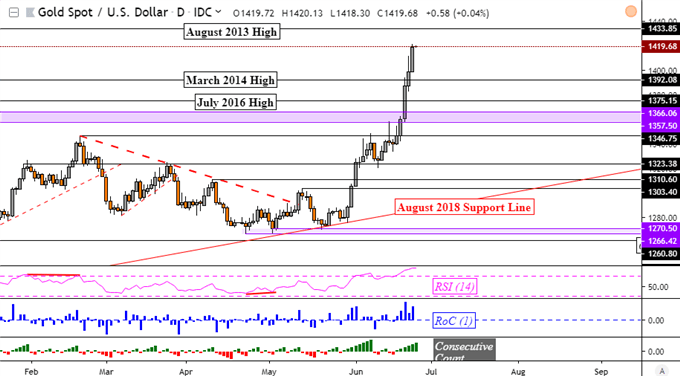 Despite the rather lackluster performance in European and US equities, the pro-risk Australian and New Zealand Dollars aimed little higher. The former was boosted earlier in the day when RBA Governor Philip Lowe cooled near-term rate cut expectations. As for NZDUSD, it held to gains accumulated from Monday’s APAC session while capitalizing on Greenback weakness later in the day,

Heading into Tuesday’s Asia Pacific trading session, S&P 500 futures are little changed with a slight downside bias. This points to a mixed session ahead as investors await this week’s crucial G20 summit for US-China trade updates. The British Pound is aiming cautiously to the downside after Boris Johnson, favored candidate for UK Prime Minister, said that Parliament is ready to back a “no-deal” Brexit.