Risk aversion denied the S&P 500 from extending further into record territory this past Friday. In fact, by the end of the day the index closed 0.13% to the downside, ending lower than its new high from Thursday. Initially, US Vice President Mike Pence offered equities a brief spark during the Wall Street trading session after he said that there are “positive signs” of progress with China.

However, the S&P 500 soon quickly pulled back as it declined alongside front-end government bond yields, a typical sign of risk aversion. The US Dollar also fell, ending its worst week since February 2018 amidst the market piling into Fed rate cut expectations after June’s dovish monetary policy announcement. The anti-risk Swiss Franc outperformed its major counterparts, adding to Thursday’s rally. 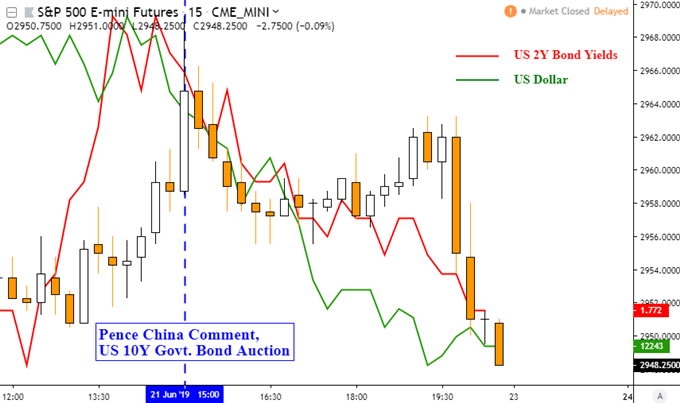 At 15:00 GMT, around the time of Pence’s comment, the latest US 10-year government bond auction saw the bid/cover ratio (demand) climb to its highest since 2012 (3.43). Meanwhile, the yield tumbled to 2.06. This has been following a general trend of investors piling into Treasuries as risks of a US recession appear to be rising. In the end, a premium on liquidity may likely boost the US Dollar down the road as it did in 2008. 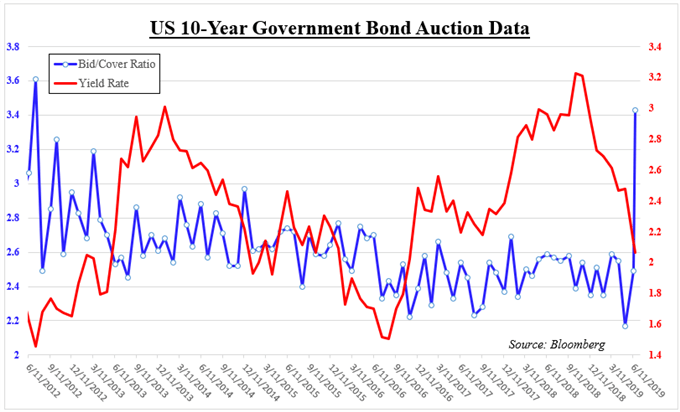 In the meantime, the focus seems to be on a dovish Fed and lower interest rates which is hurting the Greenback. Aside from CHF, the Euro also did well on Friday. It had a slew of better-than-expected European preliminary PMI data for June. Eurozone government bond yields rallied, indicating fading ECB rate cut expectations.

EURUSD thus found itself climbing aggressively, taking out a range of resistance between 1.1324 and 1.1348 (early June highs). This also extends the climb above a descending channel of resistance from the beginning of this year and paves the way for testing the next psychological barrier around 1.1403. Beyond that lays what could be a potential descending trend line from May 2018. 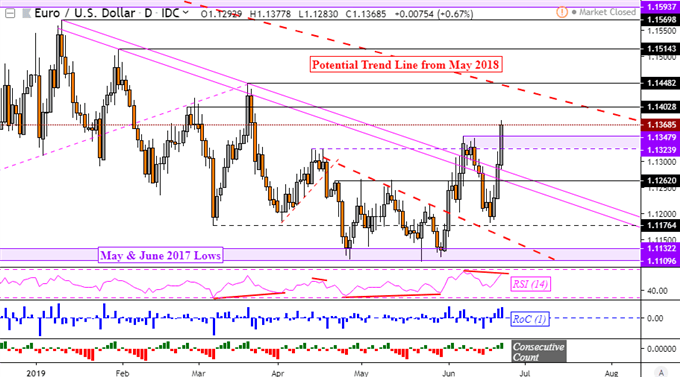 The risk aversion towards the end of Friday left S&P 500 futures pointing lower as we head into the new week. If weakness permeates into Asia Pacific equities, the anti-risk Japanese Yen and Swiss Franc may rally. Meanwhile, this posses as a risk to the sentiment-linked Australian and New Zealand Dollars. The former is looking to commentary from RBA Governor Philip Lowe as the week gets underway.

It perhaps makes sense that the S&P 500 struggled extending further into record territory. This week’s G20 summit will reveal just how far US-China trade progress might go in the coming months. This has a direct impact on the Fed’s trajectory for interest rates and thus overall risk trends. Expect choppy volatility in the near-term until the outcome becomes clear.