The pro-risk Australian and New Zealand Dollars struggled picking up upside momentum after the markets fully priced in a July Fed rate cut in the aftermath of June’s hold. There was a general increase in risk appetite, with the S&P 500 rallying as US front-end government bond yields dropped alongside the US Dollar. Yet, a clear message from the central bank signalling an imminent interest rate cut seemed notably absent.

Rather, the updated Fed dot plot revealed that - compared to March - there was a downgrade in median forecasts for rates by the end of 2020. Those now stand at 2.125% compared to 2.625% prior, a downgrade of 50 basis points which reflects one rate hike being priced out and one cut now put on the table. The same forecasts envision holding rates unchanged by year-end, with one vote separating that from perhaps 2 cuts.

As such, it seems that market expectations continue to see deteriorating US economic data as the path forward, with more uncertainty on the global trade front. If US President Donald Trump and his Chinese counterpart Xi Jinping fail to come closer to an accord at the end of this month’s G20 summit, the markets will look to the Fed to save the day and keep the US economic expansion on track.

The near-term AUDUSD downtrend was cut short above the January 2016 low at 0.6827. Leading up to this outcome, positive RSI divergence hinted of fading downside momentum which can precede a turn higher or a pause in recent declines. Prices were unable to sustain gains above August 2015 lows at 0.6900 and it is too early to tell if there may be a near-term reversal on the cards. 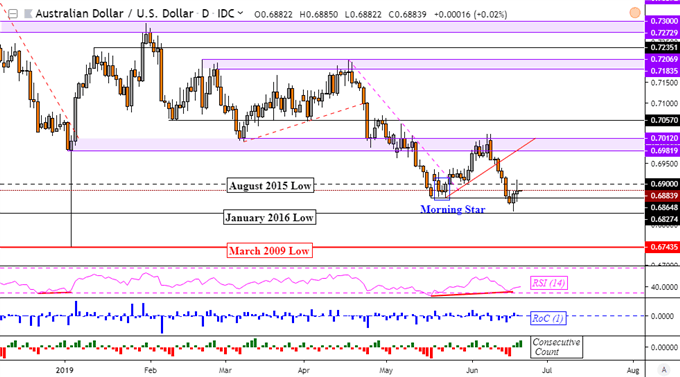 Early into Thursday’s Asia Pacific trading session, the New Zealand Dollar is aiming sharply higher against its major counterparts after domestic first quarter GDP data surprised to the upside. There may be more room for gains to be had for the pro-risk currency as equities trade upward in the aftermath of the FOMC. S&P 500 futures are pointing cautiously higher.

As for the similarly-behaving Australian Dollar, gains could be reversed on an upcoming speech from RBAGovernorPhilip Lowe. He may continue to underpin the case for near-term rate cuts, sapping the Aussie’s appeal from a yield perspective. Meanwhile, the anti-risk Japanese Yen could weaken if the Nikkei 225 follows Wall Street to the upside.