Ahead of tomorrow’s critical Fed rate decision, risk trends roared to life as equities rose aggressively in Europe and in the Americas. Earlier in the day, ECB President Mario Draghi delivered dovish commentary, opening the door to further cuts in the near-term. The Euro was the worst-performing major as German 2-year government bond yields sunk over 10 percent in the worst day since May 2018.

Prospects of even loser credit conditions in Europe sent the Euro Stoxx 50 and DAX 2.06% and 2.03% higher respectively. But that didn’t end there, in the US the S&P 500 and Dow Jones rose 0.97% and 1.35% respectively. Gains in US equities picked up after US President Donald Trump tweeted about meeting with his Chinese counterpart, Xi Jinping, at this month’s G20 meeting.

Rising bets of a US-China trade deal, coupled with expectations of at least two Fed rate cuts this year, bolstered the pro-risk Australian and New Zealand Dollars after persistent declines on growing RBA and RBNZ rate cut bets. Sentiment-linked crude oil prices also rallied alongside US stocks as a trade deal could fuel a recovery in demand for the commodity as growth prospects rise. Anti-fiat gold prices rallied.

As anticipated in this week’s crude oil technical forecast, the commodity cleared a descending resistance channel after fading downside momentum hinted of a turn higher. It rallied over 4 percent in its best day since January. But, it stopped short of a key resistance range between 54.55 and 55.41. As such, we still need confirmation of a near-term reversal, especially with the Fed rate decision due in the next 24 hours.

Yet, IG Client Positioning is offering a stronger oil bearish-contrarian trading bias as investors pile into long trades. Join me every week on Wednesday’s at 00:00 GMT as I uncover how you can use market positioning in your own trading strategy. 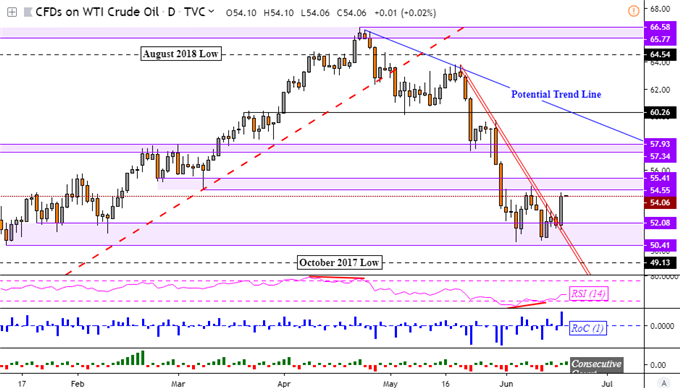 With S&P 500 futures pointing higher heading into Wednesday’s Asia Pacific trading session, gains in equities could weaken the anti-risk Japanese Yen. However, given the proximity of the Fed, investors may hesitate to commit in either direction until critical event risk passes. Prospects of a US-China trade deal may bolster ASEAN currencies such as the Philippine Peso in the near-term.