The US Dollar soared against its major counterparts on Friday, topping off its best week since early March. Gains initially picked up during Friday’s Asia Pacific trading session amidst rising dovish RBA and RBNZ monetary policy bets, sinking AUDUSD and NZDUSD respectively. Then, the Greenback picked up rather dramatically after local data softened dovish Fed monetary policy expectations.

US retail sales and industrial production outperformed relative to economists’ expectations. In addition, there were significant upside revisions in April’s statistics. Overall, front-end government bond yields rallied and the S&P 500 declined. Disappointing University of Michigan sentiment was brushed aside and the anti-risk Japanese Yen gained against most of its major peers.

The Euro was also battered, sunk earlier in the day by a slew of disappointing Italian industrial sales and orders data. The nation is facing pressure from Rome’s budgetary ambitions which could lead to an excessive deficit procedure. Both German and Italian front-end government bond yields ended Friday to the downside.

Looking at the EURUSD daily chart, the pair clocked in its worst performance in a single day (about 0.6%) since late March. The pair did clear near-term support at 1.1262, exposing and paving the oath for eventually retesting the May and June lows form 2017. That is a psychological barrier between 1.1109 and 1.1132. This also follows what appeared to be a false upside breakout through a descending channel of resistance (pink lines below). 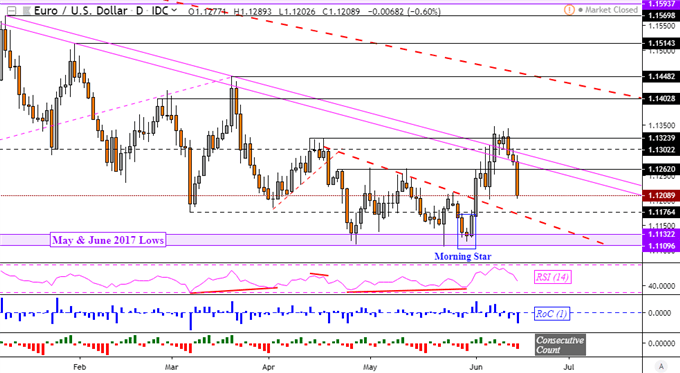 For a rather eventful week, Monday’s Asia Pacific trading session is relatively tamer. This places the focus on risk trends. S&P 500 futures were pointing a little lower at the end of last week, though not aggressively. Given the importance of the Fed this week, there may be some consolidation to be had in equities as investors hesitate to commit to a direction until the event has passed.