The Canadian Dollar outperformed against most of its major peers on Thursday as crude oil prices spiked earlier in the day after reports crossed the wires that two tankers were attacked near the Strait of Hormuz. This fueled concerns about rising geopolitical tension in the Middle East and later in the day, US Secretary of State Mike Pompeo blamed Iran for the attacks.

The commodity is a key source of income for Canada and can have knock-on impacts on the economy which can impact BoC monetary policy. Hence the close relationship between CAD and crude oil. However, sentiment faded later in the day as US front-end government bond yields fell and the commodity saw a pullback, diminishing some of the gains seen in the Canadian Dollar.

Taking a closer look at AUDCAD, especially after a lackluster Australian jobs report, revealed that the pair closed at its lowest since late October and in-line with one of my top trading opportunities for this year. Ahead does lie critical support levels via the 2013 and 2015 lows between 0.9152 and 0.9183 as positive RSI divergence warns of fading downside momentum. As such, AUDCAD bears ought to proceed with caution. 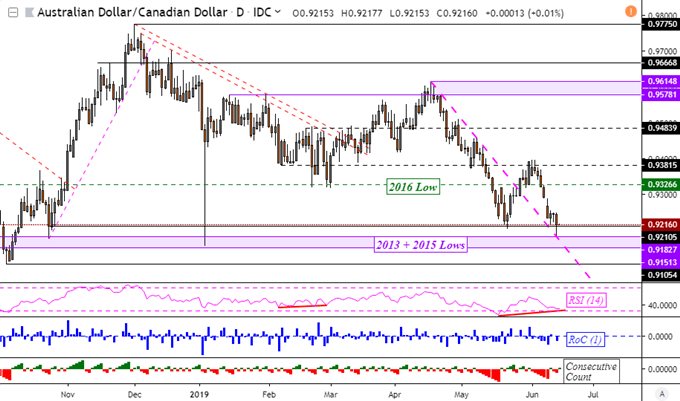 Sentiment wobbled on Thursday as Wall Street struggled to find significant upside momentum, spending most of the day oscillating. The rise in local front-end government bond prices occurred as demand picked up and yields fell at auctions for 4-week, 8-week and 30-year Treasuries. As with other recent auctions, this appears to reflect rising concerns of a US recession which may benefit the US Dollar ahead.

The anti-risk Japanese Yen did well on Thursday and could be looking to Friday’s Asia Pacific trading session for follow-through. S&P 500 futures are little changed however, hinting at a mixed open to come in regional bourses. The Australian Dollar will be eyeing a batch of Chinese retail sales and industrial production outcomes for the period of May.