The US Dollar outperformed against most of its major counterparts on Wednesday, brushing off softer-than-expected local headline inflation datathat fueled Fed rate cut bets. There, CPI clocked in at 1.8% y/y in May versus 1.9% expected and 2.0% prior. The Greenback rather appeared to tune in on weakness in the British Pound and Euro during the latter half of the session.

Starting with Pound Sterling, GBPUSD dropped as the UK Parliament voted 309 – 298 to reject a motion tabled by the Opposition Labour Party in an attempt to block a no-deal Brexit. This places pressure on the successor to UK Prime Minister Theresa May to guide the Conservative Party and Parliament towards an EU-UK divorce agreement by the end of the current October 31 extension deadline.

Meanwhile, the Euro weakened after US President Donald Trump said that he is considering sanctions to block Nord Stream 2, a gas pipeline that is being constructed from western Russia to north-east Germany. This risks fueling US-German tensions amidst an already souring global trade front where Mr Trump deferred on imposing European auto tariffs for about six months back in May. 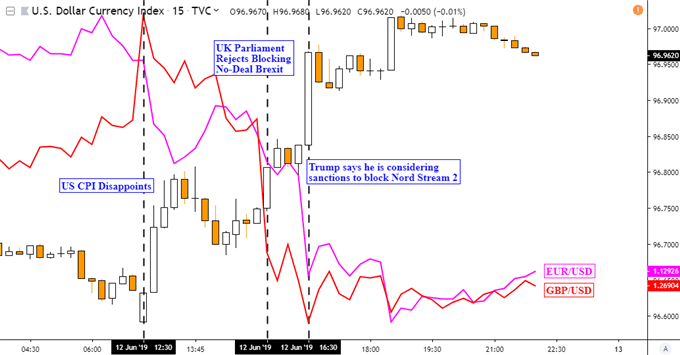 The drop in EURUSD over the past 24 hours followed an attempt to breakout to the upside above resistance at 1.1324. This area is also aligned with a descending psychological channel going back to January. It is still unclear at this point if we are looking at a reversal of the near-term uptrend from late May. A close under 1.1262 would probably solidly this bearish case. 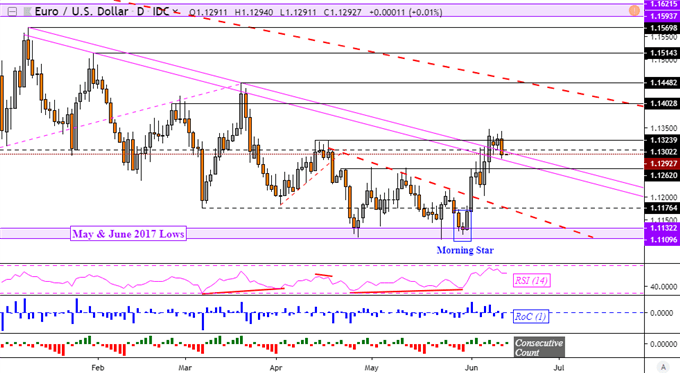 The Australian Dollar will be nervously eyeing upcoming employment data for May. Australian jobs reports have recently picked up in importance after the RBA mentioned it is closely watching the labor market after delivering last week’s rate cut. A dismal outcome can add fuel to current near-even odds of a cut in July, sending the Aussie lower.