The British Pound outperformed against most of its major counterparts on Tuesday, supported by a set of solid UK economic data. Following dismal manufacturing data yesterday, GBPUSD rose after better-than-expected local wage growth in April. The nation also unexpectedly added more jobs than anticipated at +32k, but this pales in comparison to March’s 99k increase.

On the flip side of the spectrum, the pro-risk New Zealand Dollar sunk, extending modest declines into a second day absent a clear catalyst. Its depreciation has been accompanied by a cautious pickup in the higher-yielding US Dollar as July Fed rate cut expectations softened. US front-end government bond yields are aiming narrowly to the upside ever since President Donald Trump canceled tariffs on Mexico.

This perhaps may have been one of the reasons why the S&P 500 trimmed gains it accumulated after Tuesday’s gap following indecisive technical signals as it ended the day 0.03% lower. The index was lead lower today by Boeing (-1.26%) as orders for several 737 Max were canceled. Health care shares also weighed down the index over the past 24 hours.

NZDUSD finds itself down about 1.2% from Friday’s close after prices were unable to clear highs achieved in late April. The pair still sits above the falling trend line from late March, hovering around 0.6592. Further weakness opens the door to testing 0.6501, but IG Client Positioning is hinting that gains could resume ahead as net-long trades are unwound.

To learn more about using this in your trading, join my webinar each week on Wednesday’s at 00:00 GMT. 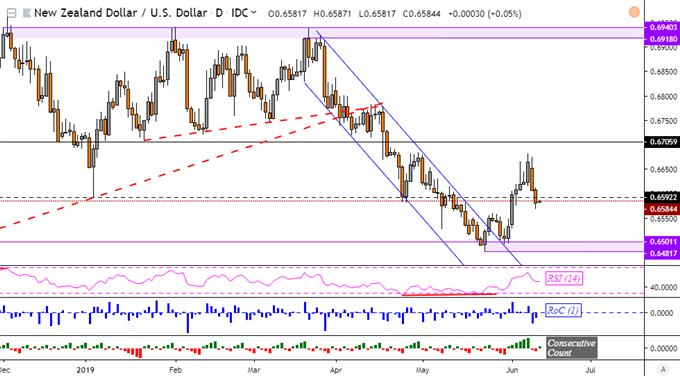 S&P 500 futures are little changed heading into Wednesday’s Asia Pacific trading session, hinting of a mixed start to come in regional bourses. The Australian Dollar could be volatile to upcoming Chinese CPI data for May, but recent performance of economic data out of the world’s second-largest economy suggests that outcomes are tending to result closely in-line with analysts’ expectations.