The US and Canadian Dollars had a solid first day of the week as US-Mexico trade tensions cooled, as anticipated. Over the weekend, President Donald Trump announced that the nation will “indefinitely suspend” tariffs on Mexico, sending ripple effects in global benchmark stock indexes as sentiment generally recovered. Haven demand ebbed as US front-end government bond yields climbed.

Gains in the relatively high-yielding US Dollar, which has been battered by rising probabilities of a July Fed rate cut, helped it to outperform against the pro-risk Australian and New Zealand Dollars. Fed funds futures are now pricing in about a 78% chance of a cut from the US, down from 83% by the end of last Friday. While the S&P 500 gapped up and rose, it ended the day back near open (+0.47%) after some losses.

Meanwhile, the British Pound fell, particularly earlier in the day following a set of dismal economic data. UK manufacturing production contracted 3.9% m/m in April which was the most in about 17 years. Meanwhile, GDP also slumped 0.4% m/m during the same period which is a second month of contraction and its worst in over three years. More of the same could pressure Sterling, given the overhang of Brexit

The pause in the near-term downtrend seen in DXY leaves the rising trend line from September 2018 intact. Now, it faces the former range of support-turned-resistance between 96.75 and 96.86. If overcome, this may lead to gains in the Greenback in the medium-term. I believe that this could be the case whether we see Fed rate cut bets pushed further out or rising fears of a US recession. 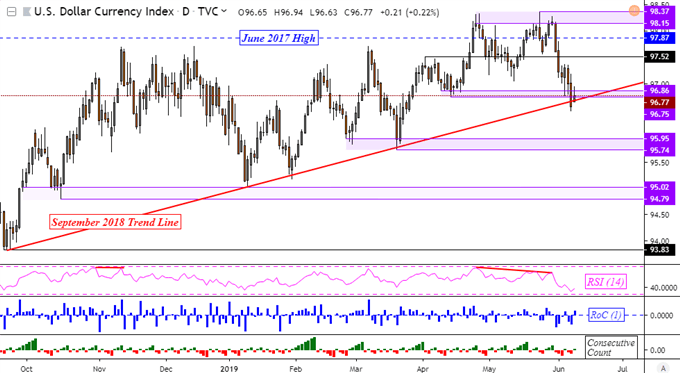 The fading upside momentum in US equities towards the end of Monday speaks to S&P 500 futures, which are now little changed with a slight downside bias. As such, regional trading bourses may struggle to find upside follow-through from Wall Street’s Monday session. Keep a close eye on shares in Australia where BHP Group stock prices are hinting of a reversal potentially coming in the ASX 200.