The anti-risk Japanese Yen and Swiss Franc easily outperformed their major counterparts, benefiting from a bout of risk aversion. This was triggered by US President Donald Trump threatening to impose tariffs on Mexico, potentially opening up a new front on the trade war in addition to China and potentially with Europe. A couple of weeks ago, Mr Trump postponed a decision to impose auto tariffs on the latter.

Due to the unfortunate timing, this raised concerns over the future of ratifying the USMCA, which is the replacement to NAFTA. While acting White House Chief of Staff Mick Mulvaney noted that the tariffs are “completely separate from trade”, top Democrat Nancy Pelosi said that Trump was “sowing chaos” regarding the levies. For the USMCA to be approved, it must pass through the US Congress.

Doubts over the trade deal sapped demand for the Canadian Dollar, and it was the worst-performing major as sentiment-linked crude oil prices capped their worst month (~ -16%) since November. The S&P 500 meanwhile ended the week 2.5% to the downside in its worst 5-day performance this year thus far. Meanwhile, the US Dollar fell as Fed rate cut bets rose, boosting gold prices as anticipated.

Against the Canadian Dollar, USD underperformed. USD/CAD left behind a Shooting Star candlestick on Friday, which is a sign of indecision. This follows persistent consolidation since the end of April and raises uncertainty over upside follow-through. Negative RSI divergence also warns of ebbing upside momentum. Near-term support appears to be at 1.3469 with resistance at 1.3521. 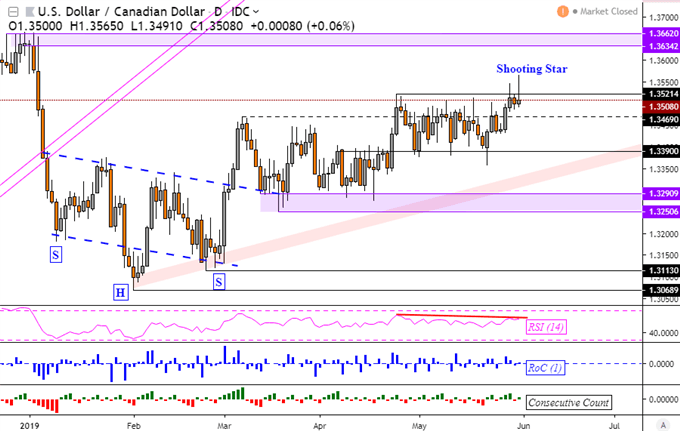 As the new week begins, all eyes will be on how sentiment unfolds and whether or not risk aversion may end up working in the US Dollar’s favor given a rate cut from the Fed. China Caixin Manufacturing PMI is up next, but the Australian Dollar may struggle to find follow-through given the proximity of the RBA rate decision where markets are anticipating a cut in early Tuesday trade.