US Dollar Weakens for a Second Day

The US Dollar underperformed against its major counterparts, extending its decline into a second day. Some point to a set of softer-than-expected US durable goods orders data as a catalyst, but weakness in the Greenback was gradual and occurred throughout the session. This could be as a result of positioning ahead of a loaded week for US economic data and the threat it poses to USD via Fed rate cut bets.

As a result, the pro-risk Australian and New Zealand Dollars outperformed, also benefiting from a cautious uptick in sentiment as equities began rising in Asia before trimming gains during the Wall Street trading session. This resulted in the Euro Stoxx 50 ending the day about 0.71% to the upside while the S&P 500 only finished 0.14% higher.

Taking a closer look at the AUD/USD daily chart reveals a bottom that could be in the works. The pair formed a bullish Morning Star candlestick pattern while simultaneously pushing above the near-term falling resistance line from the middle of April. Another confirmatory close to the upside may be the momentum needed to overturn the dominant downtrend, exposing resistance at 0.6982. 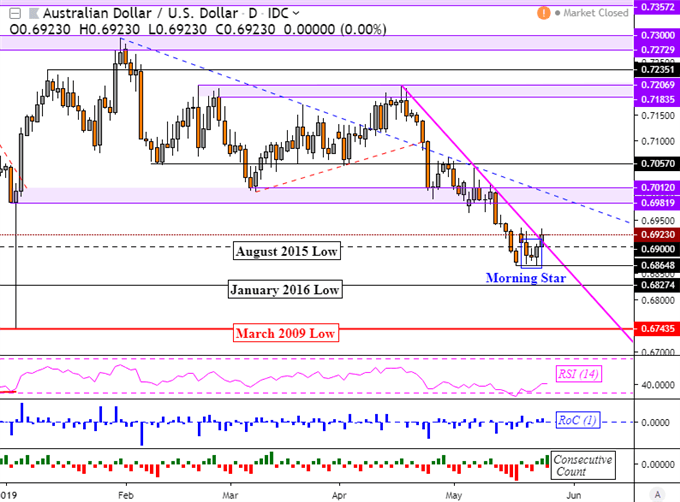 It was long coming and speculation of it sent the British Pound tumbling in recent weeks, but UK Prime Minister Theresa May announced on Friday that she will be stepping down and a new leader is anticipated by the end of July. Being official, this will complicate Brexit negotiations depending on what agenda the new PM takes. GBP/USD was volatile, being pushed and pulled between that and US Dollar weakness.

The Euro could be volatile to the European Election results, with a greater share of Eurosceptic parties a fundamental political threat to the currency. EUR/USD technical signals do point to potential weakness down the road. This may be compounded by lower-than-normal liquidity levels with US markets offline until Tuesday for the Memorial Day holiday with a relatively quiet economic docket in Monday Asia trade.