The anti-risk Japanese Yen and Swiss Franc outperformed against their major counterparts on Thursday, gaining at the expense of equities across the globe. The deterioration in risk appetite could be traced to US-China trade war fears and dismal economic data from the world’s-largest economy. In Europe, the Euro Stoxx 50 inched closer to trend-line support as the S&P 500 ended the day about 1.2 percent lower.

In the US, we witnessed the softest pace of expansion in the manufacturing sector since 2009. Things didn’t do that much better when looking at Markit Services PMI which clocked in at 50.9 versus 53.5 expected, the softest outcome since at least February 2016. US front-end government bond yields tumbled as Fed rate cut bets increased and the US Dollar weakened.

Taking these developments into account, USD/JPY tumbled about 0.65% in its worst day in over two months after retesting the falling channel from December pointed out in the second quarter Japanese Yen forecast. This leaves the Yen facing the rising support line from June 2016 again but before getting there, it must pass through the May 13 low at 109.02. 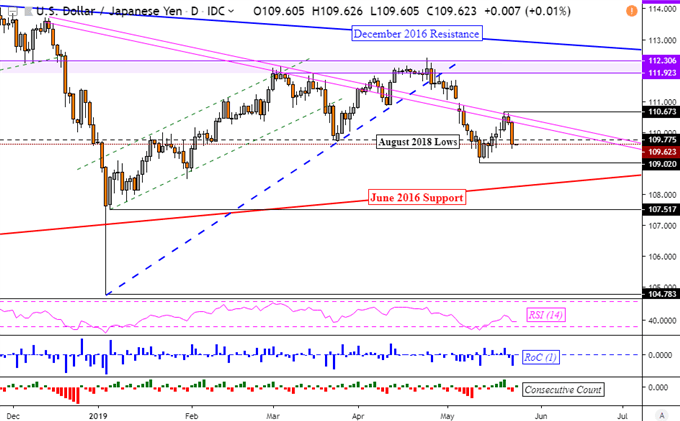 Meanwhile, crude oil prices tumbled over 5% in the worst day this year thus far, focusing on the bearish fundamentals of market sentiment as anticipated in this week’s forecast. Unsurprisingly, this extended declines in the oil-sensitive Canadian Dollar in what was a similar performance from yesterday. The British Pound kept falling on Brexit uncertainty with UK Prime Minister Theresa May closer to stepping down. 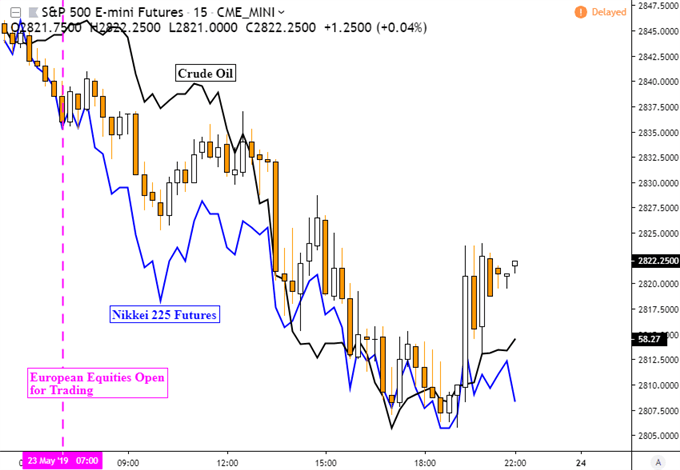 The pro-risk New Zealand Dollar looks to be keeping a close eye on general sentiment as it brushed aside local trade data. The similarly-behaving Australian Dollar also falls into this category. S&P 500 futures are now pointing cautiously higher, perhaps bolstered by commentary from US President Donald Trump who earlier said that there is a “good possibility of a China trade deal”.

However, in the medium-term, it will likely take less rhetoric and more progress in negotiations to cause a turnaround in financial markets. Over the past 24 hours, we have seen major Chinese newspapers (People’s Daily) criticize US efforts to blacklist local companies which puts trade talks in an awkward spot. The Yen may thus look past Japanese CPI data and focus on vulnerabilities in equities.