Lately, the British Pound’s downtrend has been losing control over increasing uncertainty over the future of Brexit. The currency finds itself about 5% lower against the US Dollar since its peak in late February. Over the past 24 hours, the latest update from UK Prime Minister Theresa May on the status of negotiations at one point sent GBP/USD about 0.7% higher.

Initial reports crossed the wires that Ms May was about to set out a new proposal for a Brexit deal. She ended up offering MPs a vote on holding a second Brexit Referendum in what appeared to be an attempt at avoiding a “hard Brexit”. However, a few hours later Opposition Leader Jeremy Corbyn noted that the Labour Party would not support her new plan. Sterling quickly reversed its upside progress, ending lower.

On a daily chart below, GBP/USD made an attempt to clear near-term resistance which is a psychological barrier between 1.2773 and 1.2798. This area held and prices stopped right above immediate support at 1.2696 which is the former low in late October. If the dominant downtrend extends, we may be looking at a test of the August lows 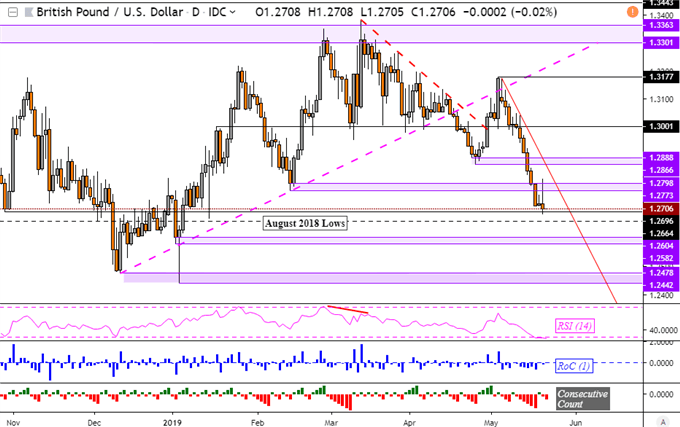 On the flip side of the spectrum, the Canadian Dollar was easily the best-performing major. The currency has been doing relatively well as the approval of USMCA, the replacement to NAFTA, has been looking more likely. On Tuesday it was reported that US congressional Democrats were working to resolve disputes related to the deal on topics such as pharmaceutical and environmental provisions.

Meanwhile, equities rallied across the board in Asia, Europe and the US as markets digested Huawei receiving a temporary extension before it gets blacklisted. The S&P 500 and Dow Jones rose 0.85% and 0.77% respectively. Curiously, the sentiment-linked Australian and New Zealand Dollars failed to find support against this backdrop. Rising bets of RBA and RBNZ rate cuts may be sapping their appeal.

Wednesday’s Asia Pacific trading session is a little light on key economic event risk, placing the focus on market mood impacting currencies. S&P 500 futures are little changed with a slight upside bias. Meaningful follow-through in equities after a rosy Wall Street session before the European one could be lacking absent updates relating to US-China trade wars.

Meanwhile, increasingly net-long positioning in GBP/USD is offering a bearish-contrarian trading bias. If you would like to learn more about using this to compliment both fundamental and technical analysis, join me each week on Wednesday’s at 00:00 GMT as I cover the prevailing trends in markets.