Crude oil prices rose in early Tuesday trade as US President Donald Trump reiterated hawkish commentary on Iran. As a reminder, over the past 24 hours, Mr Trump threatened the nation saying that it will “be the end” of the Islamic Republic if Tehran wants a fight. Since then, the US President added that any action from Iran ‘would be met with a great force’ and that ‘there are no talks going on’ with the nation.

On a daily chart, crude oil prices are aiming higher following a bounce on support above 60.26. This leaves the commodity eyeing near-term resistance around 64.54 which acted as former support back in August 2018. Do keep in mind that the rising trend line from the end of last year (red line below) was broken, hinting that the dominant move may be lower in the medium-term. 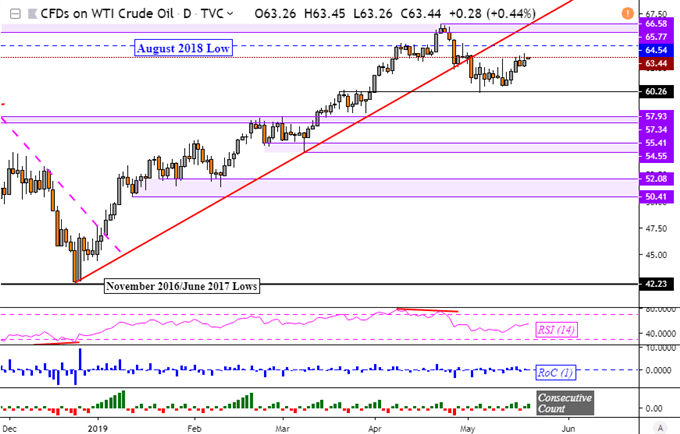 The US Dollar showed a muted reaction to commentary from Fed Chair Jerome Powell. Mr Powell noted that the economy is showing continued growth with job creation "strong". He noted that wages are rising in the context of rather "muted" inflationary pressures. With that in mind, the focus turns to this week’s FOMC meeting minutes.

The Australian Dollar was the best-performing major on Monday as it gapped higher following a surprise victory as local Prime Minister Scott Morrison held onto power in federal elections over the weekend. Australia has gone through frequent changes in leadership in recent history and this was a source of political uncertainty for AUD. With Scott Morrison’s coalition gaining more seats, this could mean less of that ahead.

The pro-risk Aussie could have had a better day if it weren’t for pessimism in equities across the board. Fears of a US-China trade war as talks stalled last week combined with the US blacklisting Huawei on national security grounds likely dented the appeal of equities. The S&P 500 closed 0.67% to the downside, but the anti-risk Japanese Yen underperformed due to weakness in Monday Asia trade.

Following Wall Street close, reports crossed the wires that the United States Commerce Department granted Huawei, along with 68 entities, a temporary license that will expire in about 3 months. S&P 500 futures are now pointing cautiously higher suggesting that there may be gains to had in Asia equities. This could bode well for the sentiment-linked Australian Dollar.

With that in mind, the Aussie still has the RBA meeting minutes and speech from the central bank’s Governor, Philip Lowe, to await. Traders are watching for hints of a rate cut in the near-term after last week’s lackluster employment report. While the minutes will detail an interest rate decision from before the jobs report, commentary from Mr Lowe may extend the AUD/USD downtrend if he brings up concerns on the latest employment report.