The British Pound was the worst-performing major, not just on Friday but on the whole since early this month. Continued deterioration in hopes of a Brexit deal between UK Prime Minister Theresa May and Opposition Leader Jeremy Corbyn have been clouding the Sterling outlook. Both leaders received an increase in urgency to reach a deal following dismal outcomes in local elections a couple of weeks ago.

Negotiations between the two parties broke down as Mr Corbyn walked out of talks, saying that they have ‘gone as far as they can’. He still left the door open to more down the road if Ms May makes ‘significant changes’. Meanwhile, the Prime Minister, while still hoping to put a new deal through Parliament in early June, has promised to step down amidst pressure from within her party, creating uncertainty for Sterling.

On the daily GBP/USD chart below, you can see the aggressive selloff in the British Pound. The pair cleared key support areas at 1.2866 and then 1.2773. It is now facing 1.2696 which is the October 2018 low. It may establish itself as support which is just above August 2018 lows. In the event of a turn higher, watch the near-term falling resistance line from early May. 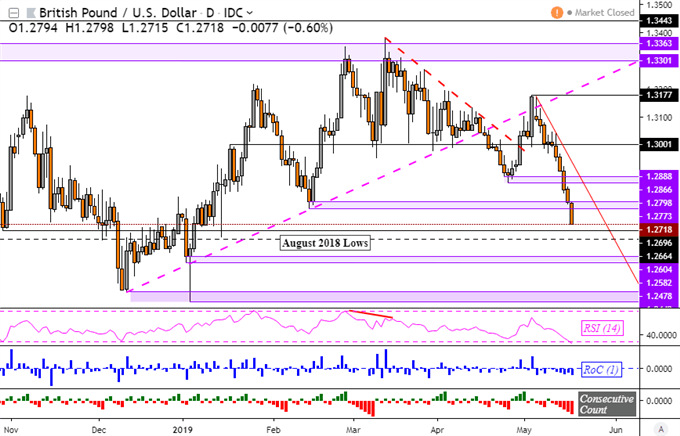 On the flip side of the spectrum, the US and Canadian Dollars had rosier sessions. The former appeared to enjoy an uptick in sentiment as the US confirmed delayed imposing auto tariffs. The latter found support as Donald Trump announced the removal of steel and aluminum tariffs on Canada and Mexico to bolster support for Congress to approve the USMCA, the supposed successor of NAFTA.

However, not all things were rosy on Friday. A report from the CNBC crossed the wires that US-China trade talks stalled towards the end of the day. By market close, the S&P 500 and Dow Jones fell 0.58% and 0.38% respectively. Yet, the Greenback held onto its gains. This highlights how during times of risk aversion, there is no rival to the highly-liquid US Dollar.

With that in mind, equities may struggle finding upside momentum as we begin the week. This may end up as a boon for the anti-risk Japanese Yen, which will likely look past local GDP data. The pro-risk Australian and New Zealand Dollars may weaken. The Aussie is expected to be the most-active major versus the US Dollar this week, partially due to its reaction to the weekend 2019 Australian federal election.