It was another volatile day in markets, with the VIX ‘fear gauge’ at one point touching its highest since January 4. Heading into Thursday’s Wall Street trading session, fears of a breakdown in US-China trade talks lead to another downside gap in the S&P 500 as it initially traded lower as anticipated. The anti-risk Japanese Yen and the similarly-behaving Swiss Franc were the best-performing majors.

Risk aversion then cooled later in the day after US President Donald Trump poured cold water on simmering market tensions. After receiving a letter from China’s President Xi Jinping, Mr Trump noted that he has ‘an excellent alternative to a China trade deal’. This comes after threatening this week to raise Chinese import tariffs on about $200b worth of goods from the current 10% rate to 25%.

While the S&P 500 reversed course, it was not enough to close the gap as it and the Dow Jones ended the day 0.3% and 0.54% lower respectively. US front-end government bond yields also somewhat recovered and so too did the US Dollar partially. The latter seemed to be battered earlier in the day as the external risks of heightened trade tensions underpin the Fed’s outward concern on growth, fueling rate cut bets.

Trade Deal or No Deal?

With that in mind, US-China trade negotiations are heading into the final hour. Talks began at 21:00 GMT on Thursday and the US is still expected to raise the Chinese tariff rate (mentioned above) shortly after 4:00 GMT Friday. As such, the pro-risk Australian Dollar may struggle finding much follow-through on the upcoming RBA statement on monetary policy.

Keep in mind that the Reserve Bank of Australia surprised less dovish earlier this week, causing a sizeable spike in AUD/USD. The pair has since trimmed gains, likely owing to its vulnerability to broad market risk aversion. Thus, we may see a similar bullish reaction to the RBA statement if it underpins the central bank’s stance. But a collapse in US-China trade talks can easily send the Aussie back lower, as we saw this week.

Taking a closer look at AUD/USD on the daily chart, we can see that the pair is sitting within a range of support between 0.6982 and 0.7012. Risk aversion may result in a downside breakout in the event of a lack of progress in US-China trade talks.

On the flip side, a positive trade outcome can not only boost Aussie from a sentiment perspective, but also gains could be compounded as the focus shifts back to monetary policy and a not-so-dovish RBA. You may follow me on Twitter @ddubrovskyFX for more timely updates on trade talks, with NZD/USD and GBP/JPY at key turning points as well. 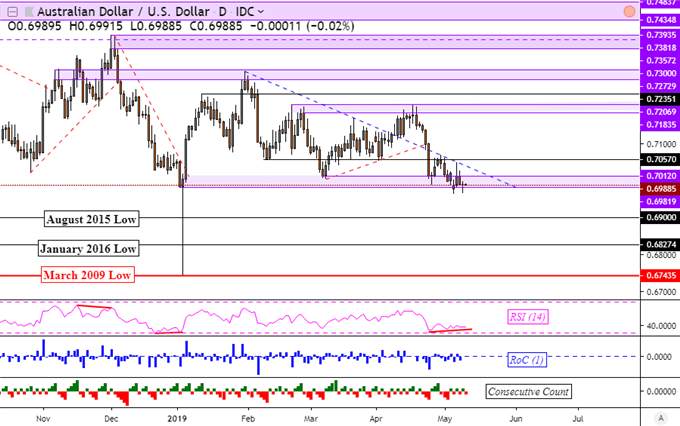