The initial reaction to the FOMC monetary policy announcement took its toll on the US Dollar. Markets focused on an unexpected cut in the interest rate on excess reserves as every other setting was left unchanged. But things soon quickly turned around 30 minutes later once Fed Chair Jerome Powell held his press conference.

Overall, Mr Powell delivered a neutral and balanced tone as he mentioned that policymakers ‘don’t see a strong case for a rate move either way’. Comments on weaker inflation were offset by confidence that the economy is continuing on a healthy path. More importantly, external risks seemed to have cooled as he noted improvements in Chinese and European data with Brexit concerns having been subsided.

At that moment, the US Dollar made a U-turn as it climbed with government bond yields. The S&P 500 then tumbled, experiencing its worst day in almost 6 weeks. It was not that there was an increase in Fed rate hike bets. It was that exceptionally dovish expectations were cooled, as anticipated. Fed funds futures now show a 55% probability of a cut by year-end, down from 67% yesterday.

One of the worst-performing currencies on Wednesday was the New Zealand Dollar, which was already weighed down by dismal employment data. On the daily chart below, NZD/USD aimed lower after testing descending channel resistance. With its downtrend now further solidified, it is eyeing near-term support at 0.6592 which if cleared, opens the door to October lows. 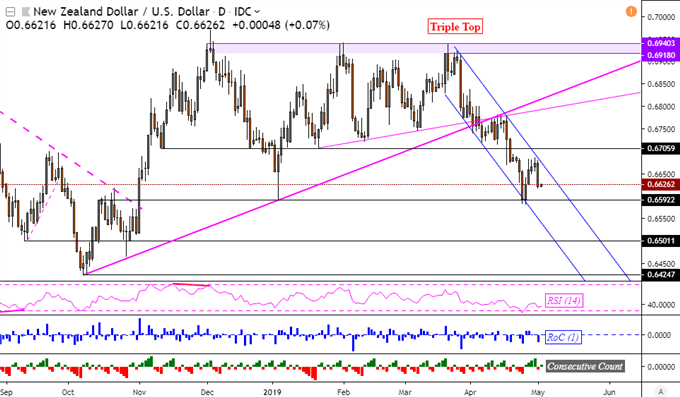 The Canadian Dollar had an overall mixed day with the day’s focus on the Fed. However, after Powell’s press conference, Bank of Canada’s Governor Stephen Poloz had another speech after the one from yesterday boosted the Loonie. He reiterated much of Tuesday’s commentary, saying that if headwinds dissipate that rates would naturally rise. This may boost CAD down the road as forecasted in my top trading opportunities for this year.

Once again the Asia Pacific economic calendar docket is thin, placing the focus for currencies on risk trends. S&P 500 futures are pointing lower, hinting at weakness in equities to come after most regional bourses were offline for a holiday yesterday. Risk aversion could permeate throughout markets after the Fed and boost the anti-risk Japanese Yen. This may come at the expense of the sentiment-geared Australian and New Zealand Dollars. 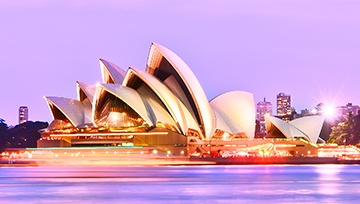