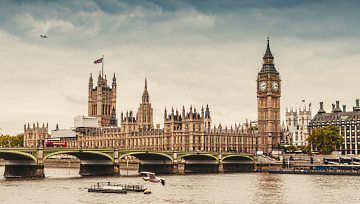 British Poundvolatility continued to be elevated as a series of Brexit-related votes in UK’s Parliament crossed the wires. On Wednesday, and by a thin margin of 4 votes, MPs rejected a ‘no-deal’ Brexit by favoring the ‘Spelman Amendment’. A subsequent vote to block a ‘no-deal’ by trying to take it permanently off the table then passed 321 to 278.

After Theresa May’s revised Brexit deal was rejected yesterday, increasing the odds of a ‘no-deal’ divorce, today’s round of voting seemed to be interpreted by the markets as decreasing the chances of the UK crashing out of the EU without any deal. Not surprisingly, the British Pound was the best-performing major currency by an overwhelming majority.

The 1.81% advance in GBP/USD on Wednesday was its most aggressive since April 2017, almost two years ago. On the daily chart below, Sterling is struggling to clear a range of resistances composed of the July and September 2018 highs between 1.3301 and 1.3363. Negative RSI divergence shows that upside momentum is fading and it may precede a turn lower. 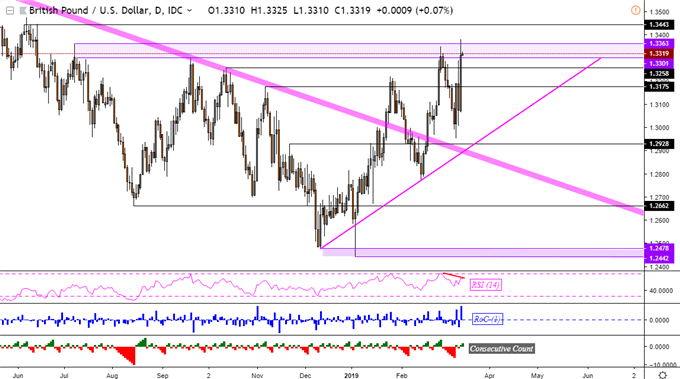 Pronounced British Pound gains throughout Wednesday robbed most other major currencies from gains. In particular, the pro-risk Australian and New Zealand Dollars failed to capitalize on an improvement in sentiment as the S&P 500 trimmed its losses from last week. This is despite losses in Asia stocks earlier in the day. The uptick in market mood seemed to be supported by US durable goods surprising to the upside.

AUD/USD will be eyeing Chinese industrial production and retail sales data early into Thursday’s session. China is Australia’s largest trading partner and economic performance in the former can have knock-on effects for the latter. According to the Citi surprise index, data in the world’s second-largest economy has been tending to disappoint relative to economists’ expectations.

While a downside surprise may bode ill for the Australian Dollar, this may be somewhat countered by APAC equities following Wall Street higher. S&P 500 futures are pointing to the upside as regional bourses begin opening for trading. In the medium-term, there remain numerous uncertainties for Brexit. Until that becomes increasingly clear, gains in stock markets based on alleviating hard-Brexit concerns may only be a temporary sugar rush. Especially with fears about slowing global growth lingering. 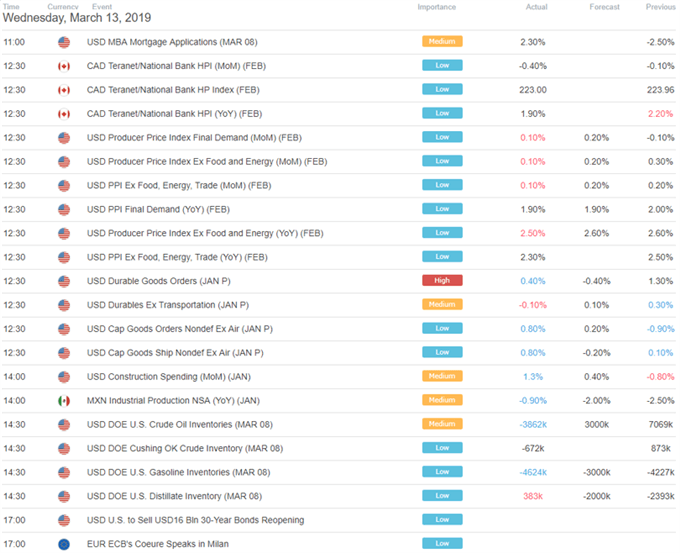