The British Pound continued rallying against its major counterparts throughout Tuesday’s session, building on expectations that a ‘no-deal’ Brexit might be avoided. It began early in the day on reports UK Prime Minister Theresa May could delay the divorce. Then, gains in Sterling were amplified after UK lawmakers were reportedly planning a second referendum as a proposal during Wednesday’s amendment debate in Parliament.

GBP/AUD climbed about 2.4% since I warned about an impending resistance break about two weeks ago. Prices are sitting on the outer boundaries of next major resistance between 1.8508 and 1.8434. Negative RSI divergence warns that upside momentum is fading. While that may precede a turn lower in the interim, confirming a close under the rising trend line from December could signal a more lasting reversal. 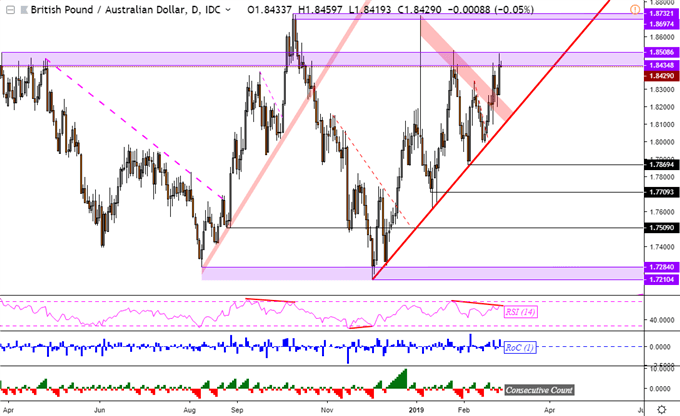 Wall Street had a volatile session as towards the end of the day, the S&P 500 trimmed intra-day gains to end almost 0.1% lower as expected. The index initially got a boost when Fed Chair Jerome Powell testified before Congress and reiterated a patient forecast on rates. Shortly after, better-than-expected US consumer confidence data helped contribute to this. But this optimism didn’t last, similar to the lack of follow through on upbeat US-China trade news.

Traders ought to proceed with caution as this could signal weakness in the underlying asset if it struggles rallying on supposedly supportive news. With that in mind, S&P 500 futures are pointing lower as Wednesday’s Asia Pacific trading session gets underway. The ASX 200 looks particularly vulnerable after its worst day since January. Declines in equities may boost the anti-risk Japanese Yen. Meanwhile, a wildcard could be the second Summit between US President Donald Trump and North Korea’s Leader Kim Jong Un. 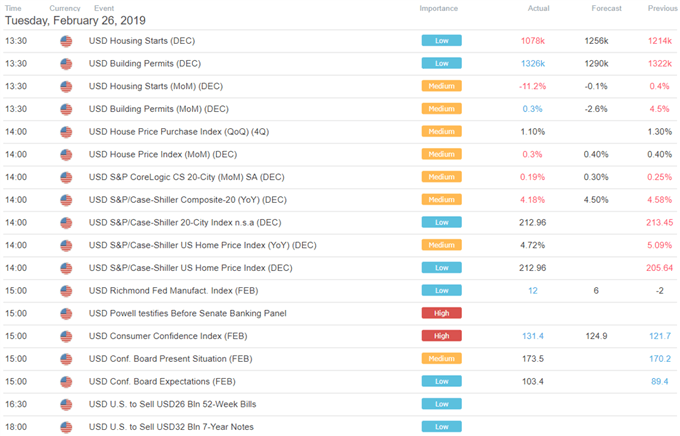