The British Pound is aiming higher against its major counterparts in early Tuesday trade after reports that UK Prime Minister Theresa May is considering delaying Brexit. Later today, she is expected to put the issue of extending Article 50 to a meeting of Cabinet ministers. Then, Parliament should be updated of the Cabinet’s choice. 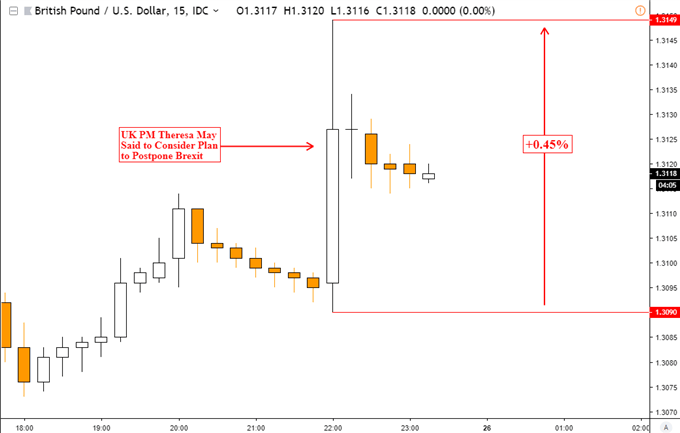 Sentiment generally continued improving throughout most of the day on US-China trade news. US President Donald Trump said that he would postpone a tariff hike on $200b in Chinese imports. Trade wars remain a wildcard for risk trends given their complicated nature. As we saw over the past 24 hours, some uncertainty surrounding these negotiations remain as they head into their final stages.

Despite a pullback in the S&P 500 towards the end of the day, the index still finished higher but near-term resistance was reinforced. The pro-risk Australian and New Zealand Dollars still aimed higher while the anti-risk Japanese Yen fell flat on its face. Crude oil prices sunk as US President Donald Trump expressed his disdain for higher costs and OPEC’s efforts to reduce supply.

The US Dollar generally weakened as a rise in equities sapped the demand for haven-linked assets. Looking ahead, Asia’s trading session is lacking notable economic event risk. This places the focus on sentiment and market mood. S&P 500 futures are pointing a little bit lower, suggesting that the late declines in US equities on Monday might have more room to continue. Curiously, AUD/USD’s climb on Monday left it sitting squarely on resistance as a bearish reversal pattern overshadows upside progress.