Market mood soured considerably during the European trading session as the DAX closed at its lowest in over three weeks. This followed another round of disappointing economic data, French and Industrial production largely missed expectations. Keep in mind that the latter nation is in a technical recession and growth is slowing in Germany (the economic powerhouse of the EU).

There was a last-minute rally later in the day on Wall Street, but a clear catalyst seemed absent. The S&P 500 ended the day +0.07%, supported by tech shares (after gapping lower) but the Dow Jones Industrial Average closed -0.25% as expected. The pro-risk Australian and New Zealand Dollars aimed cautiously lower while the anti-risk Japanese Yen outperformed. The US Dollar was rather little changed.

Despite the unemployment rate unexpectedly ticking higher to 5.8% in January from 5.6% in December, the Canadian Dollar soared. This was largely thanks to impressive gains in employment while the labor force participation rate edged higher (see first economic calendar below). Canadian front-end government bond yields rallied, suggesting a slight uptick in BoC rate hike bets.

As we begin the new trading week, Monday’s Asia Pacific trading session is lacking notable economic event risk. Meanwhile, Chinese stock exchanges should be coming online from the week-long holiday. This places the focus on sentiment. The mixed Wall Street session may echo into regional bourses. Though it seems that the market default in times of quiet headlines is risk aversion with the S&P 500 running out of reasons to rise.

The Nikkei 225 turned lower after prices fell below a rising trend line as expected. On Friday, the Japanese benchmark stock index gapped lower and closed just under the March 2018 low at 20,347. This has exposed the December 2018 lows which could be targeted next at 19,239 – 18,963. For more timely updates, you may follow me on twitter @ddubrovskyFX for the latest market moves. 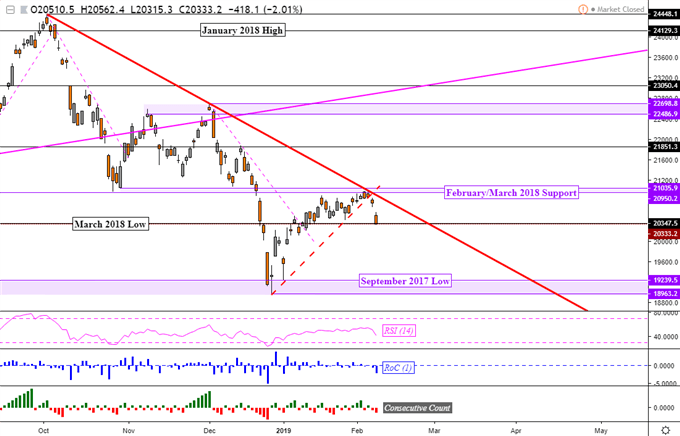