In stark contrast to Friday, market optimism deteriorated as the new trading week began. The source of pessimism appeared to stem from disappointing earnings reports from Caterpillar and Nvidia. Both companies noted slowing demand from China and highlighted the uncertainties surrounding trade wars. These helped drag the S&P 500 about 0.78% lower as US government bond prices rallied.

This signaled a classic case of risk aversion which resulted in a mixed reaction in the US Dollar. While it can benefit from haven demand, if Fed rate hike bets also weaken it may weigh against the greenback. One currency that outperformed was the anti-risk Japanese Yen which benefited at the expense of the Australian and New Zealand Dollars. The latter tend to follow stock markets with positive correlation.

Meanwhile sentiment-linked crude oil prices had the worst day since December 24th which weighed against the Canadian Dollar. The nervousness in investors may continue as we transition into Tuesday’s session. Reports crossed the wires that the US charged Huewei’s CFO, Meng Wanzhou, with financial fraud. This comes as China’s Vice Premier, Liu He, visits Washington this week to continue trade talk negotiations.

Towards the end of last week, markets seemed to rally on bets that the two nations might agree on an outcome that avoids further tariff increases. The latest development surrounding the Chinese tech giant comes at an unfortunate timing that complicates the situation as risks seem to be tilted to the downside. S&P 500 futures are pointing lower, signaling that Asia Pacific stocks may decline next. Gains in the Nikkei 225 are overshadowed by a bearish reversal pattern.

AUD/USD failed to breach a critical descending resistance line over the past 24 hours which further reinforced it. Prices are sitting right on top of a near-term horizontal range of support between 0.71452 and 0.71645. A descent through it may open the door to testing 0.7081. You may follow me on twitter @ddubrovskyFX as to see timely updates on the Aussie Dollar. 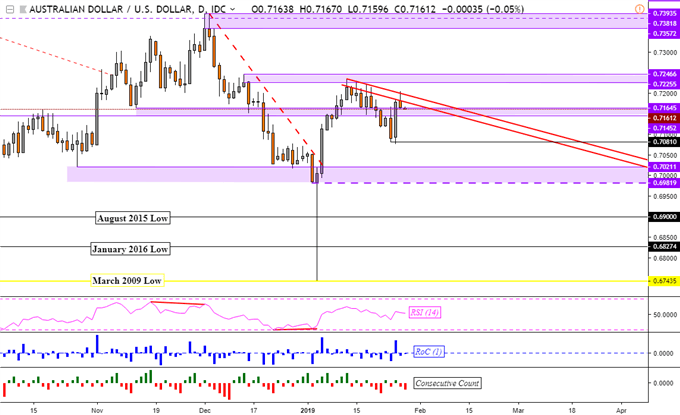