The Euro underperformed against its major counterparts in the aftermath of the ECB rate decision and Mario Draghi press conference as anticipated. After leaving rates unchanged, Mr. Draghi reiterated the need for significant stimulus to sustain inflation. He added that risks to the outlook have moved to the downside and that incoming information has been weaker than expected.

On the daily chart, EUR/USD has broken under a near-term rising range of support from November 2018 (see chart below). This has opened the door to resuming the dominant downtrend as prices sit right on top of support at 1.13022. But, the Euro’s descent today was not a straight path lower. At one point, EUR/USD trimmed all losses from the ECB. 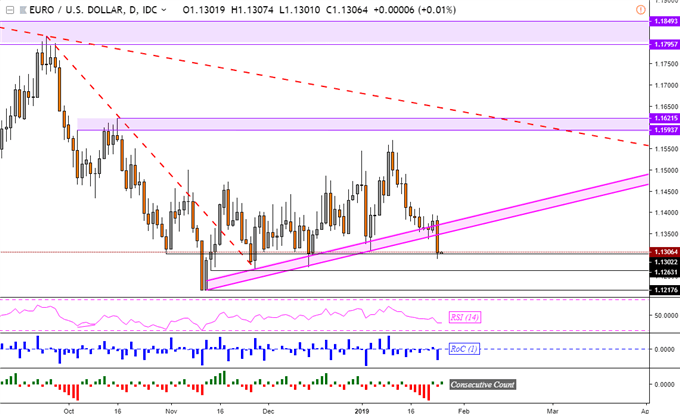 During Mario Draghi’s press conference, US Commerce Secretary Wilbur Ross offered worrying developments regarding trade negotiations with China. Mr. Ross mentioned that the two countries were ‘miles and miles’ away from an agreement. The US Dollar declined on the news but it did recover later in the day as market mood soured on Wall Street.

The ongoing partial US government shutdown also went into its 34th day without showing signs of ending. While the S&P 500 closed about 0.14% higher, the session came with volatility as it swung between gains and losses. The pro-risk Australian and New Zealand Dollars ultimately edged lower.

The British Pound spiked higher early into Friday’s trading session after a report from the UK Sun that the DUP (Democratic Unionist Party) will support Theresa May’s new Brexit deal. The DUP is crucial in backing the UK Prime Minister. Last week, a lack of support from the DUP led to a historical defeat for Mrs. May in Parliament when her exit deal was rejected.

Friday’s Asia Pacific trading session lacks critical economic event risk, placing the focus for foreign exchanges markets on sentiment. The Nikkei 225 has been carving out a bearish reversal pattern, hinting that a turn lower might be in the cards. This would likely weigh against AUD/USD and NZD/USD as the anti-risk Japanese Yen appreciates. 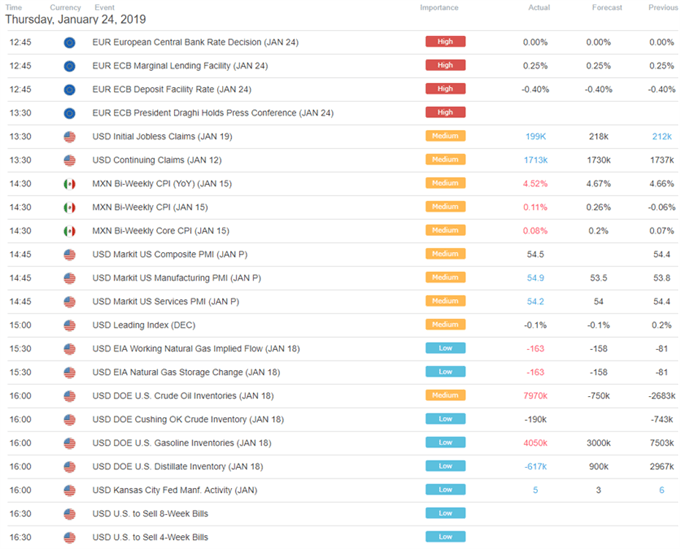