Just getting started trading the British Pound? See our beginners’ guide for FX traders to learn how you can apply this in your strategy!

While US stocks generally ended the day higher, the same rosy optimism was notably absent in foreign exchange markets. The pro-risk Australian and New Zealand Dollars ended the day lower while the British Pound extended gains from yesterday’s Brexit deal rejection. The markets appeared to interpret as increasing the chances of a second Brexit referendum.

Looking at the chart below, once the FTSE 100 opened for trading the index declined and ended the day about 0.5% lower. Simultaneously UK front-end government bond yields rallied as late-2019 Bank of England rate hike bets increased. This might have explained why the British Pound rose, albeit very choppily as sentiment in foreign exchange markets deteriorated and Theresa May’s government survived the no confidence vote. 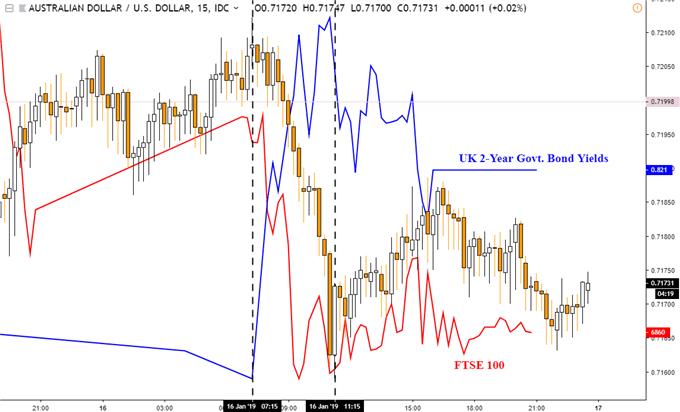 The US Dollar rallied as a result, benefiting from its status as the world’s reserve currency. The Fed’s Beige Book offered relatively little in terms of volatility. Even though it ended the day higher, the S&P 500 declined about 0.4% towards the final moments of the session. This occurred as a report from the Wall Street Journal crossed the wires. Federal prosecutors are now pursuing a criminal case against Huawei.

Back in December, Huawei’s CFO was arrested and that fueled more tensions between the world’s largest economies. Today’s developments risk souring sentiment as Asia Pacific markets open for trading given that the US and China are still negotiating a trade deal. As such, the push above resistance in the Nikkei 225 may be a false alarm. If sentiment sours, it is likely that the anti-risk Japanese Yen gains.

Due to the last-minute declines in the S&P 500, a Shooting Star candlestick formed by Wednesday’s close. Confirmation via closes lower may signal a bearish reversal to come. As such, keep a close eye on the rising trend line from December. In the event it is breached, near-term support is around 2,532. You may follow me on Twitter @ddubrovskyFX for more immediate updates in the S&P 500 and more. 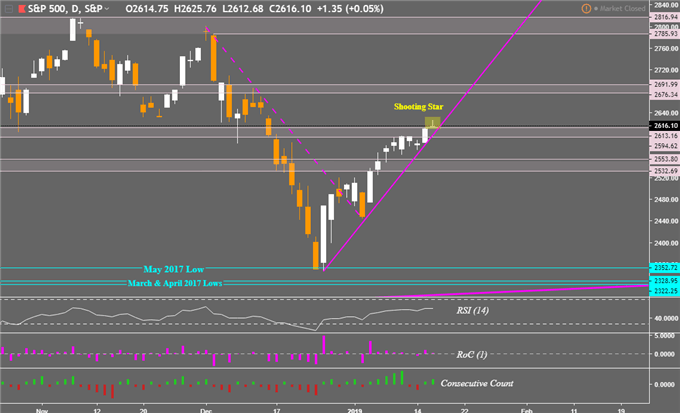