GBP/USD, Stocks Up on Market Hopes for Second Brexit Referendum

Just getting started trading the British Pound? See our beginners’ guide for FX traders to learn how you can apply this in your strategy!

For some time, the British Pound was expected to be the most active major thanks to the numerous uncertainties surrounding Brexit. This was very much prevalent today. After falling almost two percent from its peak on Tuesday, GBP/USD rose and finished the day almost right back to where it started after UK Prime Minister Theresa May lost the vote for her Brexit deal by a historically wide margin of 230 counts.

The rally in the British Pound seemed straight forward enough. Opposition Labour Party Leader Jeremy Corbyn called for a no-confidence vote against Theresa May’s government after her deal was rejected. Then the Northern Ireland DUP Party said that it would side with the Prime Minister’s Party. If Mrs. May’s Party wins the no-confidence vote, a general election will not be in the cards.

Rather, the UK will be left with a few options. Theresa May can go back to Brussels and try to get more concessions from the EU. Article 50 could be extended, though that requires unanimous approval from the 27 EU member states. Or, a second referendum could be held altogether. Given the difficulties of the former two, the markets interpreted the latter as the more likely outcome.

In fact, this triggered a dose of ‘risk on’ appetite in the markets. Indeed, the anti-risk Japanese Yen and Swiss Franc lost some ground as the S&P 500 and Nikkei 225 futures rallied. Meanwhile the pro-risk Australian and New Zealand Dollars trimmed losses from earlier. The US Dollar, which rallied into the Brexit deal vote, gave up some of its gains. The Euro weakened as ECB’s President Mario Draghi said that ‘significant stimulus is needed’.

Looking ahead, Wednesday’s Asia Pacific trading session is lacking notable economic event risk. This will probably leave foreign exchange markets eyeing risk trends. With that in mind, regional bourses may trade higher as they digest developments from the UK and Wall Street finishing the day higher. S&P 500 futures are pointing higher. This risks weakening the Japanese Yen further to the benefit of the Australian and New Zealand Dollars.

The British Pound remains in a near-term uptrend against the US Dollar going back to December 2018. I have defined this via the broadening rising range on the GBP/USD daily chart below. The pair is coming up to test two critical resistance barriers. The first is a horizontal line connecting the November 22nd and January 14th highs around 1.2928. Clearing that would open the door to testing a descending range of resistance from May 2018 which is keeping the dominant downtrend intact. Near-term support is around 1.2662. 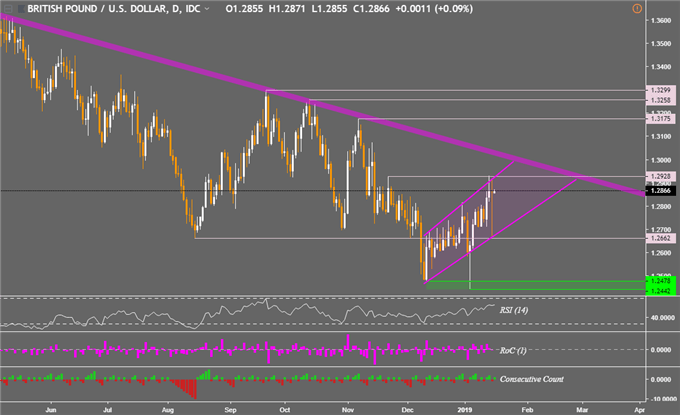 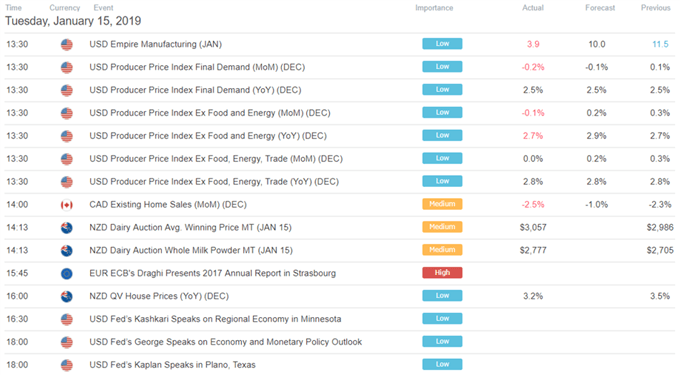