The anti-risk Japanese Yen and Swiss Franc overwhelmingly underperformed against their major counterparts, tumbling with a revival in market optimism. On Wall Street, the S&P 500 and NASDAQ Composite climbed 3.43% and 4.26% respectively along with broad gains in European benchmark stock indexes. Thus, the pro-risk Australian and New Zealand Dollars outperformed.

This came amidst the backdrop of increased speculation of the so called ‘Powell Put’, in which the Federal Reserve would step in to support falling stock prices. After a remarkable US jobs report lifted the US Dollar, Chair Jerome Powell sunk it with dovish commentary that placed the anticipated rate hike path in 2019 at risk. He said that the central bank is listening to the market’s risk concerns.

This does place the Fed in an awkward place if data outperforms ahead. Despite slowing headline inflation, US average hourly earnings rose to touch October 2018 highs which is also the fastest pace since 2009. Speaking of jobs data, Canadian employment statistics was mixed. The nation added fewer jobs but the unemployment held at 5.6% unexpectedly.

The Canadian Dollar climbed alongside front-end government bond yields, signaling fading BoC rate cut bets. It also helped that sentiment-sensitive crude oil prices found support with the pickup in market mood. However, the commodity trimmed gains after reports that US Gulf Coast gasoline stockpiles hit a record high. This did extend declines in EUR/CAD as anticipated in my top trading opportunities of 2019.

With that in mind, this week may offer a couple of favorable bullish CAD trades if the risk-reward perspective is right. I am closely watching AUD/CAD, NZD/CAD and EUR/CAD. You may follow me on twitter @ddubrovskyFX for updates on my setups in Canadian Dollar crosses. Technically speaking, the Australian Dollar may be getting ready to clock in gains against the US Dollar and the Euro.

Monday’s Asia trading session may see local stocks and the Nikkei 225 follow Wall Street higher as regional bourses digest developments from the US. This risks trimming more gains seen in the Japanese Yen in recent weeks. Keep an eye out for US China trade talks, they will occur over the next couple of days. A lack of progress there may quickly sour market mood and vice versa. 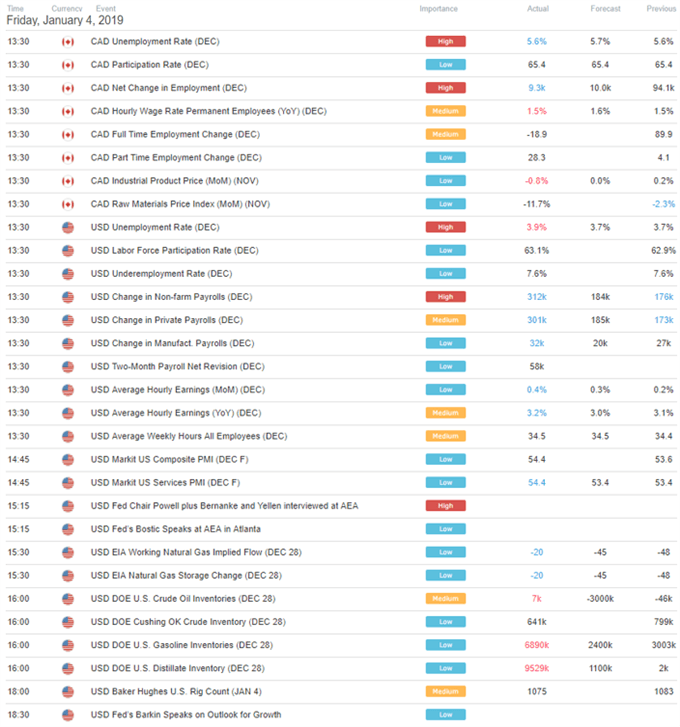