It seemed like yesterday’s rally on Wall Street, which was the best since 2009, would be a one off. Heading towards Thursday’s close, the S&P 500 was down about 2.82% for the day. This followed declines from European benchmark stock indexes. The Euro Stoxx 50 dipped roughly 1.22% as it entered a bear market following mixed performance from Asian shares amidst dismal Chinese industrial profits.

Market pessimism was then amplified following a disappointing US Consumer Confidence report as anticipated. The outcome of 128.1 in December compared to 133.5 expected was the worst since July. Within the details, gauges of labor market expectations declined by the most since 1977. On top of that, consumers anticipating buying various durable goods, housing and autos weakened.

Then, a last minute rally changed all of that and the S&P 500 ended the day about 0.86% higher. A clear catalyst seemed absent, but it may have been becuase of sellers closing their positions and booking profits before year-end. Looking at the chart below, open interest in S&P 500 futures declined simultaneously with the turnaround in the index. Meanwhile volume increased, showing more trading activity in generally illiquid market conditions due to the holidays. This is a recipe for more volatility. 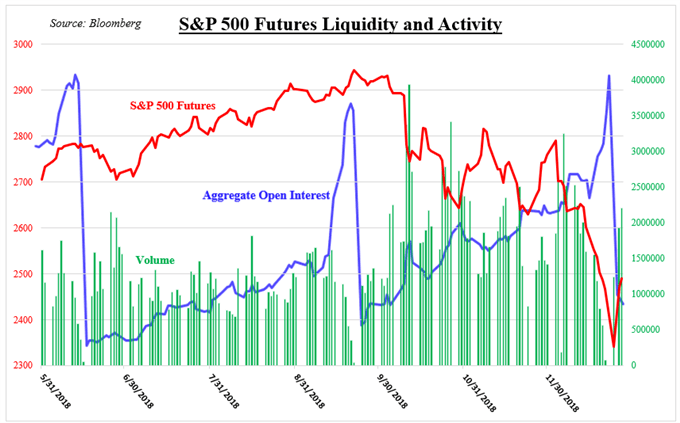 The US Dollar saw mixed reaction, rising against the pro-risk currencies and falling against the anti-risk ones. US government bond prices rose, reflecting a flight to safety. Sentiment-linked crude oil prices also weakened, but not enough to offset gains from yesterday’s impressive rally. The Japanese Yen and Swiss Franc outperformed as carry trades unwound.

With that in mind, S&P 500 futures are pointing lower which suggests that Asia Pacific benchmark stocks indexes may end the year another day lower. As such as Japanese Yen may rally as the Australian and New Zealand Dollars fall short. But do keep mindful of those wishing to offset their short positions, which result in a turnaround in stocks as it did on Wall Street. 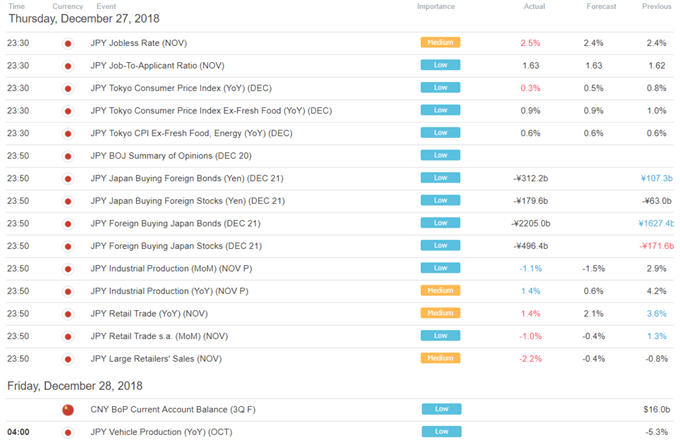